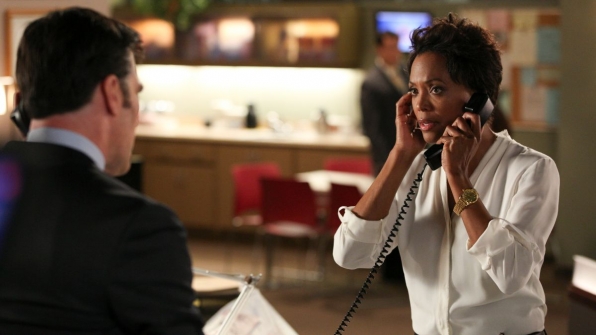 Criminal Minds aired the first episode of its 11th season on Wednesday, September 30.

According to a recap at Entertainment Weekly, the premiere introduced the character of Dr. Tara Lewis into the BAU team.

Lewis, who is played by actress Aisha Tyler, joined the BAU after her clinical evaluative skills helped in the successful capture of the episode’s unidentified subject or UnSub in the show’s lingo.

According to EW, the episode begins with Rossi investigating a series of murders in which the UnSub left paint on the faces of the victims.

Hotch makes a call to J.J, who reminds him that she is still on maternity leave, reflecting the real-life fact that actress A.J Cook just recently gave birth to her second child. EW noted that she will be back after episode 7.

Afterwards, TV Line said, Hotch interviews Dr. Lewis, who came with positive recommendations from the San Francisco field office. She tells Hotch that she spent 12 years interviewing imprisoned serial killers, and now wants to use her profiling skills to send other serial killers behind bars.

Meanwhile, the team manages to track down the evidence and find that it points to a contract killer named Giuseppe Montolo. They also find out that the UnSub has a husband-and-wife duo that he coerced into helping him with his killing spree. The duo is revealed to be SWAT member Phil Wilson and his wife Betty.

The team eventually tracks Montolo down to Phil Wilson’s residence, where he is holding the SWAT member hostage. Dr. Lewis comes into play impersonating Betty on the phone to trick the UnSub, and she manages to fool Montolo.

Phil eventually subdues the suspect, who escapes with Derek in pursuit. Phil attempts to commit suicide, but was convinced not to after being told that his wife will need his testimony to get leniency from the court.

Later, Derek confronts a wounded Montolo in the hospital. The contract killer threatens to hunt the “Dirty Dozen” down in revenge.

As a result of her exceptional performance in the case, Hotch decides to recruit Dr. Lewis into the team.