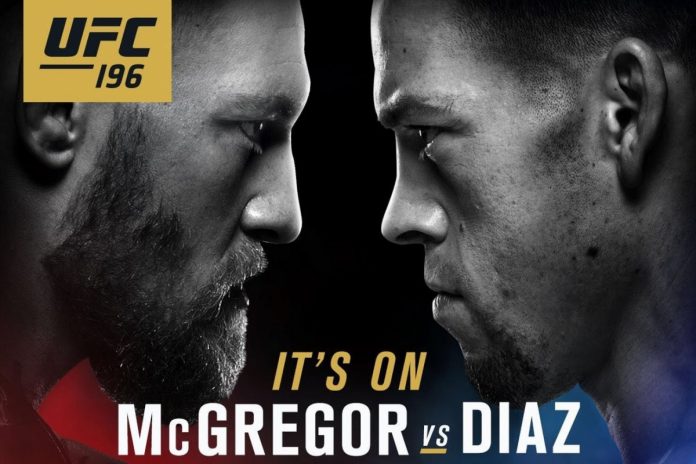 The long awaited Conor McGregorNate Diaz rematch gets a new date as it is now scheduled to headline the upcoming mixed martial arts event, Ultimate Fighting Championship (UFC) 202, this August.

The match was announced by UFC President Dana White last Saturday night, during the UFC 199 pay-per-view telecast. Despite being a month delayed as the said showdown was supposed to happen next month at UFC 200, the match will arguably draw in more attention with the additional drama leading up to the new rematch.

The whole process put McGregor, Diaz, and the UFC at odds with one another, starting with Diaz calling out the league for not giving him enough credit after beating the undefeated Dubliner. UFC then got into a rift with McGregor after he was unable to make an appearance in one of the Nevada press junkets for the supposed fight.

While McGregor and White seemed to have started mending their ties with each other, Diaz on other hand posed a different challenge as White recently revealed his frustrations about the negotiations with the American fighter.

“The problem is what drives me crazy is when you have a contract. Everybody sits down at one point and we do a deal. Everybody is happy. You shake hands, you hug. And then we move onto the next fight and everybody wants to blow up the deal,” White said on FOX Sports 1’s “The Heard” (via MMA Fighting).

White did not go into the specifics on his talk with Diaz but it can be presumed that the fighter is asking for some changes in the original terms of the deal. It is no secret that Diaz has been unhappy about how the UFC and the mixed martial arts community treats him and in light of McGregor’s fiasco, it is possible that he is asking for a bigger portion of the pie compared to what they have originally agreed on.

“What you try to do in a deal like this is you try to be as fair as you can be, and obviously the problem is that we have a deal, we already have a deal. …. [Diaz] has a contract,” the fight promoter continued.

Regardless of the differences in opinion with all the parties involved, the long awaited rematch is going to push through on Aug. 20. The match will be held at the newly opened T-Mobile Arena in Las Vegas and fans are hoping for no more setbacks this time.