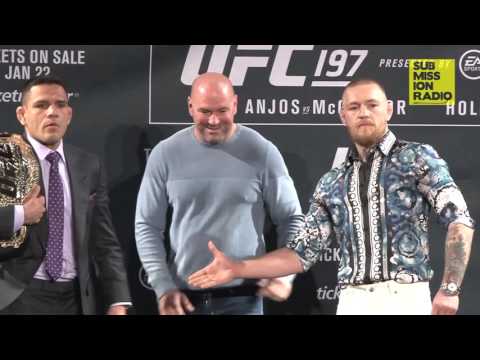 UFC lightweight champion Rafael dos Anjos was another one of Conor McGregor’s critics, after the latter’s upset loss on Saturday night at UFC 196 against Nate Diaz.

“The Notorious” was dealt his first loss in the Octagon when he was forced to submit by the Stockton, California native in the second round of their fight via a rear-naked choke.

What made Diaz’s victory more notable was that he was not in top fighting shape entering the bout. The 30-year-old fighter even admitted to being on vacation in Cabo, Mexico when he was called to step in for dos Anjos, who was forced out of the fight due to a broken foot.

During his interview with veteran journalist Ariel Helwani during Monday’s edition of “The MMA Hour,” dos Anjos believes McGregor’s decision to face Diaz was because the aforementioned fighter did not have any training when he was called upon.

“RDA” also noted how other fighters such as Donald Cerrone and former lightweight champion Anthony Pettis were also among the choices but were not picked by McGregor because they were in fighting shape.

Dos Anjos then questioned McGregor’s will as a fighter, noting how the Irishman seems to “tame up” whenever he is in the receiving end of punches.

“Conor did not show a lot of heart,” dos Anjos said. “He’s a lion when he’s punching somebody, but when he’s getting punched, he becomes a cat. A little cat.”

The Brazilian champion also ripped McGregor for the latter’s personality, saying how “God made everything perfect” through Nate Diaz’s victory. Dos Anjos then went on to compare McGregor to Holly Holm, who was finished with the same choke by current champion Miesha Tate.

But unlike McGregor, Holm chose not to tap and was put to sleep in the process.

“Bro, how are you going to tap on the neck, on the choke? Go to sleep, man,” dos Anjos said. “Be a man. Holly Holm showed more heart than him.”