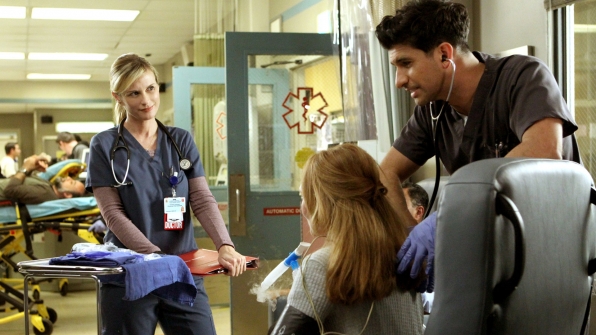 Fans of the CBS medical drama “Code Black” were surprised to hear the news that Raza Jaffrey and Bonnie Somerville, who plays Dr. Neal Hudson and Dr. Christa Lorenson, respectively, have been dismissed from the show, while Boris Kodjoe and Jillian Murray have been promoted to being series regulars beginning next season.

The said cast cut was decided by the producers for reasons that are purely creative and not a sign of cutbacks and to somewhat reboot the medical drama and reach a broader audience. The show is also expected to add new characters for what is said to have a total of 17 episodes next season.

“Code Black” will showcase a huge cast of regulars for its season 2 with a total of 13. The show will also feature a very big guest cast to reflect what’s going on at a hospital’s emergency room.

In an interview with Deadline Hollywood, creator Michael Seitzman said, “The concept of the show is for each season to begin on the first day for incoming freshman residents, just as in real life there is a cycle of residents coming in and residents either graduating or moving on.” He added that another hallmark of the show is that its fictional hospital is intensely populated. Seitzman mentioned that they average around 800 extras per episode, not to mention their cast of doctors and nurses that regularly come in and out the show. Furthermore, he said that Somerville and Jaffrey were well-loved by the viewers as well as their cast and crew and added that their departure is painful for them.

Season 1 mainly focused on four freshman residents and their colleagues at the Angels Memorial Hospital. The show’s a consistent performer in terms of ratings and the CBS’ management decided to give it a sophomore season while at the same time canceled two other shows, namely “Limitless” and “CSI: Cyber.” The network’s management believe that “Code Black” has a stronger staying power than the other two shows.

“Code Black” season 2 will air this fall on CBS.