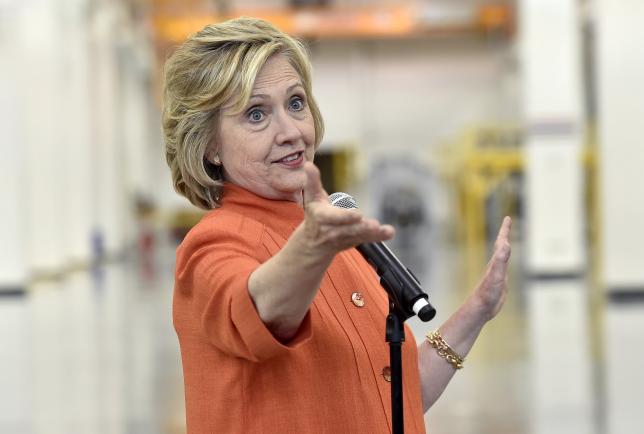 Hillary Clinton’s lead in the race for the 2016 Democratic presidential nomination has narrowed and her overall favorability ratings have fallen to their lowest levels since 2001, CNN reported on Wednesday.

It said 47 percent of Democratic and Democratic-leaning voters surveyed in a poll this month said they supported Clinton for the party’s nomination, down 9 points since July and marking “the first time her support has dipped below 50 percent in national CNN/ORC polling on the race.”

Backing for Vermont Senator Bernie Sanders, her closest rival for the Democratic nomination, has risen 10 points since July to 29 percent, CNN said. Vice President Joe Biden, who has yet to announce whether he will run, is third at 14 percent.

Clinton maintains her edge against potential Republican opponents, however, despite a “growing perception that by using a personal email account and server while serving as secretary of state she did something wrong,” it said.

CNN said the poll conducted from Thursday to Sunday found 44 percent of adult Americans had a favorable view of Clinton and 53 percent unfavorable, her worst showing since March 2001.

That compared with 45 percent favorable and 48 percent unfavorable in a July CNN poll.

Clinton was the top choice when Democratic voters were asked which candidate they trusted to handle the economy, race relations, foreign policy and the income gap between rich and poor Americans.

“Her biggest advantage comes on foreign policy, where 61 percent of registered Democrats say they trust Clinton over the rest of the field,” CNN said.

Clinton’s use of her private email while secretary of state from 2009 to 2013 came to light in March and drew fire from political opponents who accused her of sidestepping transparency and record-keeping laws.

Officials from U.S. intelligence agencies have so far identified 305 emails from Clinton’s private server to be reviewed for potentially classified information, the State Department said in a court filing on Monday.

Asked about her use of the private email account, about 56 percent of poll respondents said Clinton did something wrong, up from 51 percent in March, CNN said. Thirty-nine-percent said she did nothing wrong.

The CNN/ORC poll interviewed 1,001 Americans and had a margin of error of plus or minus 3 percentage points.