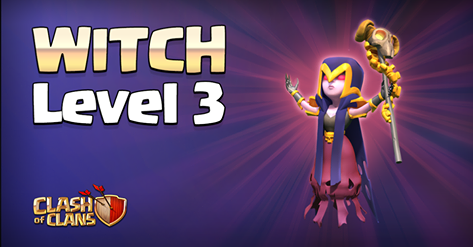 In the recent teaser released by Supercell for their most downloaded strategy game “Clash of Clans,” a new Level 3 Witch was shown to be included in the upcoming Town Hall 11 update.

According to Touch Arcade, the new character looks slightly different than its previous iteration as the outfit and staff have added decorations and frills. The most important upgrade to the character is the ability to summon five skeletons instead of four with the maximum being alive to be 10 at a time instead of the usual eight. This results to a possible stronger defense as there is an additional number of skeletons to hit before the opponent can reach the Witch. There is a 25 percent increase in her special skill as well.

In the sneak peek shared on the official Facebook page of the game, it is revealed that even though the new feature does not seem like a big change at first, when faced with a multi-targeted inferno, it can have a big impact especially with countless new attack strategies that players can think of. It remains to be seen, however, if the Witch can cause significant damage against the updated Town Hall 11 defenses.

Another detail made known in the video is the reduction of “nexting” costs for Town Hall 10. It will decrease to 850 gold from 1000 gold. Players can take advantage of this when picking the right village to attack.

The recent announcement followed the previous reveal of Level 7 Minions, which are touted to balance out the defense-heavy mechanism of the gameplay and withstand hits from the improved Archer Towers.

Although Supercell has yet to set an official schedule for the release of the update, reports predict that it may become available on or around Dec. 7.

'Fuller House' season 2 spoilers: Stephanie is up for a new...