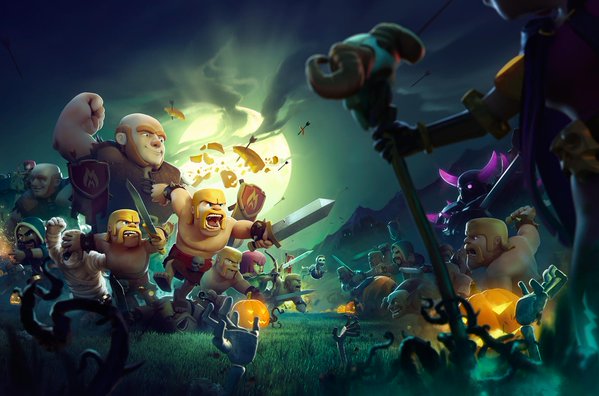 On the Google Play page for the game, the update is described, “For a limited time, experience the spooky Halloween Clash theme with possessed Poison Spells, bubbling Cauldron obstacles and more!”

The update includes Halloween Cauldron obstacles that will grant some bonus Elixir to players who harvest them. Likewise, the 1-gem Spell Factory boost has returned, and it will run through the Halloween weekend.

According to Game Zone, aside from the bonuses, there will be aesthetic changes as well. Some pumpkins will appear in the village map. On the other hand, Master Herald revealed that a nighttime gameplay has been introduced. The report suggests that the addition of a new in-game mode might cause interesting effects to the overall gameplay.

During nighttime, shiny gems and torches will appear in bases, and they will illuminate various areas. As these objects will not provide total visibility, players might encounter difficulties defending their bases or setting up defenses.

Although the updates for “Clash of Clans” made the game bigger, some fans have been worrying about the new features that are being implemented more frequently nowadays. Master Herald reported that players are worried that the changes are “coming in a little too fast.”

Meanwhile, with the game’s ClashCon event happening on October 24, some major announcements are being expected by players. The much-awaited Town Hall 11 is predicted to be announced during the event that will be held in Helsinki. In addition, Barbarians might be upgraded to level 8 along with other upgrades to certain heroes.

Other activities that will be organized during ClashCon include the Clan War Quarterfinals, panel discussions on how to build a successful clan and basic attack strategies, meet and greet with YouTube players, and opening of merchandise shops.