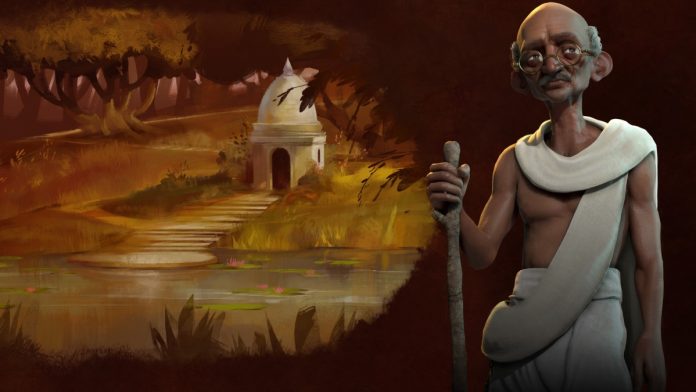 As the release date of Sid Meier’s “Civilization VI” draws near, Firaxis Games continues to unveil the leaders and civilizations that will be in the game. This week, the focus is on the Indian civilization and their leader, the peace-loving Mahatma Gandhi.

As shown in the video, Gandhi has the unique ability called Satyagraha. This ability gives India a substantial boost in faith for each civilization India meets that has founded a religion and is at peace. It also gives opposing civilizations happiness penalties for fighting against India.

The Indian civilization’s unique ability is called Dharma. With this, India gets the follower belief bonuses of all religions present in their cities, not just the bonuses from their primary religion.

India’s unique unit is the Varu war elephant. The unit has the ability to reduce the combat strength of adjacent enemy units, which can be quite useful when fighting multiple units.

It is safe to say that anyone who has played “Civilization” knows that Gandhi has a strange reputation in the series, and it has been a running gag since the first game. From the looks of it, however, Gandhi and India’s bonuses in this game are focused on faith and peaceful cohabitation.

It is possible that Gandhi may not be a warmonger in the sixth installation of the “Civilization” gaming franchise, but fans will have to wait to be sure that Gandhi’s not hoarding any nukes to surprise them when the time comes.

“Civilization VI” has been announced for release on Oct. 21.