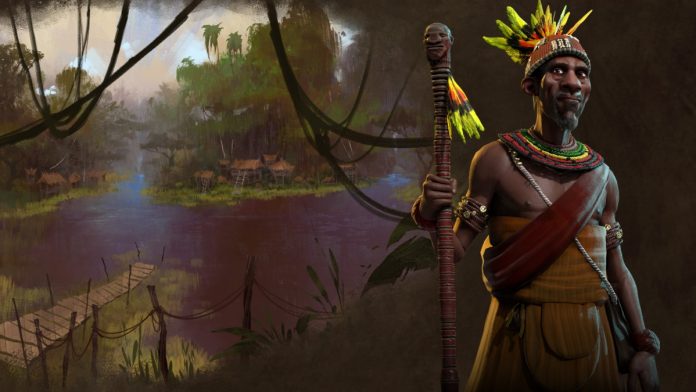 After revealing Mahatma Gandhi and the Indian civilization’s return to the game last time, developer Firaxis Games decided to introduce something new to “Civilization VI” as it unveiled the Kongo civilization and its leader, Mvemba a Nzinga, with a trailer during the recently concluded PAX West event.

Mvemba a Nzinga is famous for championing the Christian faith across his empire, so his unique ability is also faith-related. While he cannot build Holy Sites, he does get the Founder belief of any majority religion in his cities. Furthermore, Nzinga also has the ability to produce a free Apostle unit every time a M’banza or theatre district is built. However, this is subject to the city’s majority religion.

The aforementioned M’banza is Kongo’s unique tile improvement. It replaces the Neighbourhood improvement and it can be built earlier in the game. Besides housing, the improvement also provides food and gold resources.

Kongo’s unique unit, the Ngao Mbeba shield-bearers, replaces the Swordsman unit; however, players do not need the strategic resource Iron to produce these units. The Ngao Mbeba can move through woodland and rainforest tiles without penalty, and these tiles also do not block the unit’s line of sight. The unit also receive defensive bonuses against ranged attacks, making them dangerous foes for archer units. With these abilities, the Ngao Mbeba can be a strong melee unit and an excellent scout early in the game.

Kongo previously appeared as an unplayable militaristic city-state called “M’banza Kongo” in “Civilization V,” so players will get to control them for the first time in this game. Kongo was also playable in the popular “Civilization IV” submod called “Rhye’s and Fall Dawn of Civilization,” however, the civilization did not appear in the main game.

“Civilization VI” is scheduled to be released for the Microsoft Windows PC on Oct. 21.

'Mass Effect 4: Andromeda' rumors suggest next installment will be massive