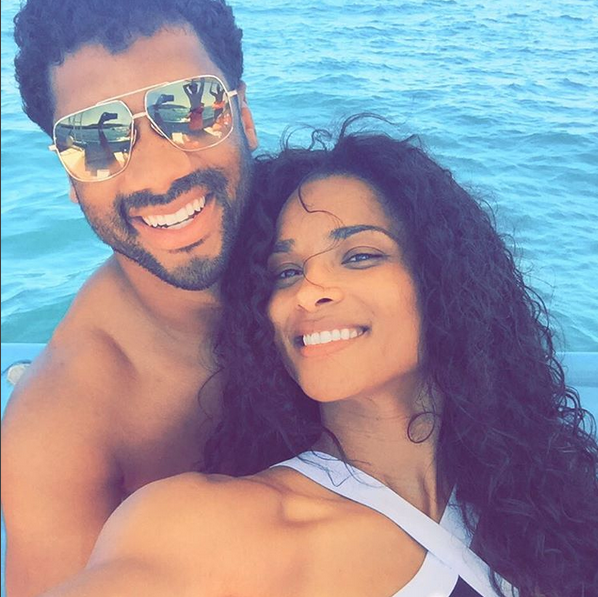 Despite criticisms from some fans, singer Ciara and football player Russell Wilson’s relationship seems to be growing stronger than ever.

In celebration of Wilson’s 27th birthday, Ciara took it to social media to give tribute to her man saying, “Happy Birthday To The Most Loving, Caring, and Selfless Man I Know. You Are Truly #1of1.”

In an interview with Entertainment Tonight at the red carpet during the recent American Music Awards, Ciara revealed how she keeps tabs of the Seattle Seahawks quarterback’s game albeit having busy schedule.

For the team’s game against the San Francisco 49ers, appearing on the award show did not stop her from supporting her boyfriend. “Listen, I am multitasking right now! I am a woman of ambition on a mission, and I’m definitely checking in! I got the Seahawks app live and going, and it’s looking good, too. They scored very early in the game, and they’re looking strong!” she said.

When ET’s Kevin Frazier and Jeannie Mai asked her on a possible date of the big day, Ciara side-stepped the question and responded with, “Isn’t that a guy conversation? You talk to the guy about that stuff, right?”

The two started dating in April, and they previously opened up about their relationship, stating that they are practicing abstinence due to religious beliefs.

“I knew God had brought me into her life to bless her and for her to bless me and to bless so many people with the impact that she has and I have,” Wilson gushed to Rolling Stone. Ciara also shared that they have the same views on almost everything, and it was “pretty much organic.”

The couple made their public debut during a White House State Dinner earlier this year and has been attending numerous events together since. Wilson even planned a surprise superhero-themed birthday party for Ciara last month, and they went to a Mexican getaway with Ciara’s son, Future Jr.

'Deadpool 2' release date, news: Have Cable and Domino been cast...