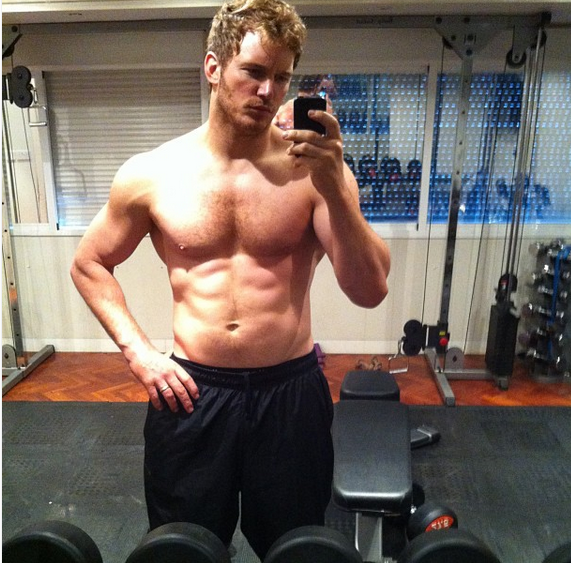 Chris Pratt has been the leading star of two box-office success films recently, “Guardians of the Galaxy” and “Jurassic World.”

As one of the most-sought after actors in the industry, Pratt shared how he has transformed into his super fit physique which is noticeable in comparison to his comedic days as the almost 300-pounder cast member of the series “Parks and Recreation.”

Being on the cover of Men’s Health magazine July issue, the actor jokingly said, “It’s all right; you can say that I’ve been fat.”

But as he developed a healthier lifestyle, he revealed that both mind and body preparations are needed, “As an actor, I can’t have proper mental prep without proper physical prep. Even though I knew it deep inside, it look me a long time to realize how getting physically sharp helps me get ready for other things in my life.”

Talking to Men’s Fitness last year, he said that he usually does “three or four hours a day of just consistent, ass-kicking hard work” to lose 60 pounds in six months, in preparation for his role as Star Lord.

The report mentioned that Marvel Studios paired Pratt with a personal trainer and a nutritionist who planned his diet to have 4,000 calories a day together with lots of water an ounce of water per pound of body weight.

“I was peeing all day long, every day. That part was a nightmare,” he mentioned on the interview.

Pratt took it to Instagram to first reveal the result of his hard work, posting a picture of his chiseled frame and a caption that reads, “Six months no beer. #GOTG Kinda douchey to post this but my brother made me.”

The actor’s usual workout includes sessions of P90X, running, swimming, boxing and kickboxing, and for his role in Jurassic World, he usually worked with a trainer six days a week, the report added.