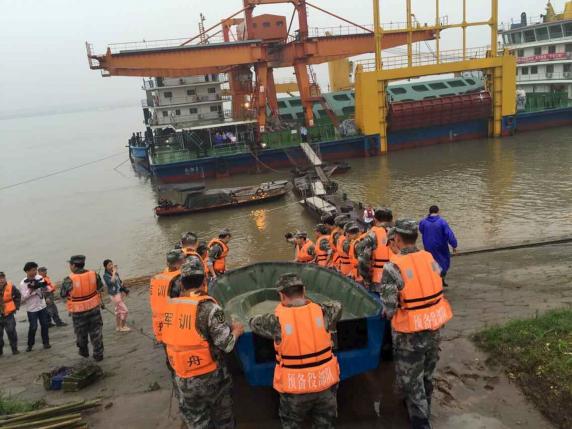 A passenger ship carrying 458 people, many elderly Chinese tourists, sank in the Yangtze River in a storm late on Monday and only about 20 had been rescued so far, state media said, in what could be one of China’s worst disasters for years.

Premier Li Keqiang was heading to the scene of the accident in central Hubei province, Xinhua said on Tuesday.

said those rescued from the Eastern Star included the ship’s captain and engineer, who said the vessel sank quickly after being caught in what it said was a cyclone.

State radio reported that the ship sank within about two minutes and that no distress call had been issued. About 20 people had been rescued, Xinhua said later on Tuesday.

The official People’s Daily said seven people had swum to shore to raise the alarm.

The Hubei Daily, another official publication, said the ship had capsized and that the hull of the stricken vessel was still visible in the river, where the water was about 15 meters (50 feet) deep.

Among those on board the ship were 406 tourists, aged from around 50 to 80, on a tour organized by a Shanghai tour group, and 47 crew members, the People’s Daily said.

Dozens of vessels are helping in the search and rescue, including fishing boats, Xinhua said. At least 20 divers were also on their way to the scene and about 100 fishing boats were helping in rescue efforts, according to the Hubei Daily.

The vessel was heading to southwest China’s Chongqing city from Nanjing, capital of east China’s Jiangsu Province. It sank at around 9:28 p.m. local time in the Jianli section of the river. It had the capacity to carry more than 500 people, the People’s Daily said.

The Eastern Star was owned by the Chongqing Eastern Shipping Corporation, which runs tours along the Three Gorges area along the Yangtze river. The company has been operating since 1967, the Hubei Daily said.