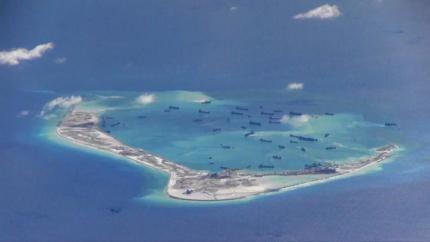 China said on Friday it would not stand for violations of its territorial waters in the name of freedom of navigation, as the United States considers sailing warships close to China’s artificial islands in the South China Sea.

A U.S. defense official told Reuters the United States was mulling sending ships within the next two weeks to waters inside the 12-nautical-mile zones that China claims as territory around islands it has built in the Spratly chain.

China claims most of the South China Sea, though Washington has signaled it does not recognize Beijing’s territorial claims and that the U.S. navy will continue to operate wherever international law allows.

“We will never allow any country to violate China’s territorial waters and airspace in the Spratly Islands, in the name of protecting freedom of navigation and overflight,” Foreign Ministry spokeswoman Hua Chunying told a regular news briefing.

“We urge the related parties not to take any provocative actions, and genuinely take a responsible stance on regional peace and stability,” Hua said in response to a question about possible U.S. patrols.

The United States and its allies in Asia, including Japan, have called on Beijing to halt construction on its man-made islands and the issue is central to increasingly tense U.S.-China relations.

Chinese President Xi Jinping has said China has no intention of militarizing the islands, but Washington analysts and U.S. officials say Beijing has already begun creating military facilities there.

Admiral Harry Harris, commander of U.S. forces in the Pacific, told the Aspen Security Forum in July that China was building hangars on one of the reefs – Fiery Cross – that appeared to be for tactical fighter aircraft.

In May, the Chinese navy issued eight warnings to the crew of a U.S. P8-A Poseidon surveillance aircraft that flew near China’s artificial islands, according to CNN, which was aboard the U.S. aircraft.

The Philippines, Vietnam, Malaysia, Brunei and Taiwan have overlapping claims in the South China Sea.

Backlog of migrants swells in the Balkans, tempers fray