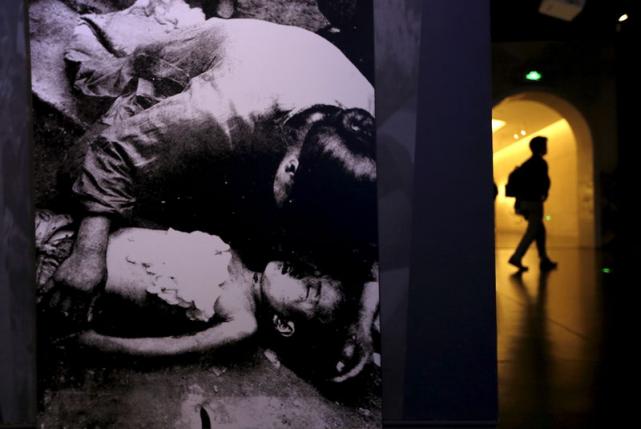 With dioramas of heroic Communist soldiers and graphic pictures of massacres, Chinaformally kicked off its commemorations for the 70th anniversary of the end of World War Two on Tuesday with the unveiling of a new exhibition.

Sino-Japan relations have long been affected by what China sees as Japan’s failure to atone for its occupation of parts of the country before and during World War Two, andChina rarely misses an opportunity to push that message.

The new exhibition, called “Great Victory, Historical Contribution”, is located at a war museum next to the Marco Polo Bridge, the site of a skirmish in Beijing’s outlying suburbs 78 years ago that sparked an all-out Sino-Japanese war.

Speaking in front of armed forces personnel, children and veterans, propaganda chief Liu Yunshan said people should draw inspiration from the “splendid annals” of the war.

“We must use this platform and classroom to guide officials and the people to draw sustenance from the hard struggles of the past,” said Liu, who is ranked number five in the Communist Party’s hierarchy.

The exhibition highlights some of the horrors of war, including a skull from a person killed in the 1937 Nanjing Massacre and a spiked metal cage used to torture captured Chinese.

Another picture shows a woman raped by Japanese soldiers and then disemboweled and dumped on the road.

Almost all the exhibits have English translations, underscoring the government’s desire to get its message about Japanese brutality and Communist bravery to a worldwide audience.

The Communist Party’s role is in sharp focus – exhibit captions are peppered with references to the reluctance or refusal of the Nationalist Chinese government to fightJapan.

In China’s official narrative the contribution of Nationalist troops – who later fled to Taiwan after loosing a civil war with the Communists in 1949 – is barely mentioned.

Over the weekend, Taiwan’s president said it was Nationalist Chinese forces who won the war, decrying attempts to “distort” history.

“Our exhibition clearly shows that our Communist Party was the cornerstone in the war to oppose Japanese aggression, and we have a lot facts here to show that,” deputy museum director Luo Cunkang told reporters, when asked about the Taiwan comments.

China’s commemorations will reach a crescendo in September with a parade of Chinese and Russian troops through central Beijing.

No senior Western leaders are expected to attend.