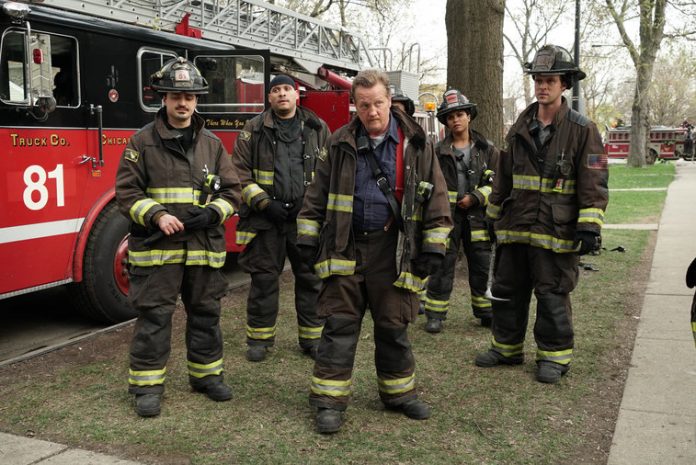 Expect a lot of romantic moments from Chili and Jimmy as the hot new couple heats up Chicago Fire while a tension of a different kind brews between Patterson and Severide.

“I’m going to kiss him (Jimmy) a lot. We’re like a couple of puppies. We’re always like [cuddling].” Dora Madison, who plays Chili, said in an interview with TVLine.

She clarified though that theirs will be a relationship that also explores complications caused by their jobs. This is where Chili’s laid back attitude influences Jimmy and makes their dynamics more interesting.

“[We explore] what their differences are. I think Jimmy is a little more [square] than Chili is. Maybe she’ll make him more fun,” she said.

The new couple started developing their relationship during the last episode, entitled “Regarding This Wedding.”

Meanwhile, the next episode, entitled 2112, promises a lot of excitement as Severide is offended by how he is treated by Patterson.

The episode promo hints at a big blowup between the two borne from their growing rivalry . The teaser also hinted that this rivalry may also put lives at risk. In the promo, Patterson outright asserts his authority in one scene when he said he is the one calling the shots. In another scene, he dismisses Severide’s assessment of the scene by saying “Negative, I didn’t ask for your opinion,” which is expected to result in a major conflict between the two characters.

Meanwhile, despite the brewing tension in the firehouse, some excitement is also to be expected when the team is rewarded for responding to a call involving an 18 wheeler.

The episode synopsis reads: “Boden’s new neighbor asks him for a favor that could have serious repercussions; Severide is upset when he’s treated like a candidate by Patterson; and Cruz is visited by a gangbanger who knows his brother. In other events, the team responds to a call that involves an 18-wheeler; and is thanked with tickets to see Rush.”

'Spider-Man 2017' news and theories: will new villain be Kingpin? Kevin...