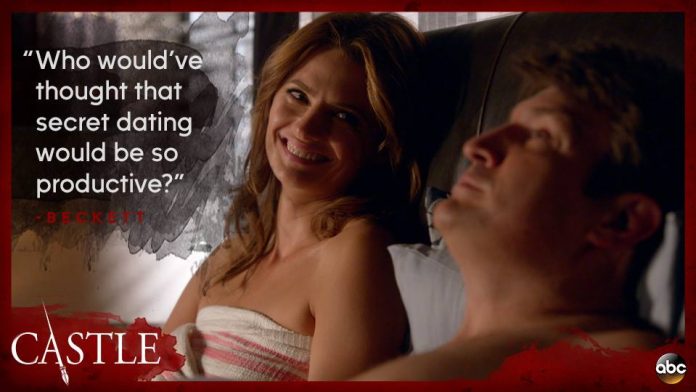 Fans of procedural drama series “Castle” will see a special airing for season 8 scheduled in two successive days within the week.

Following the installment titled “Witness for the Protection” released during Valentine’s night, a new episode is also slated to be unveiled during its usual Monday time slot titled “Dead Red.”

Reports claim that even though the latest episode does not have a romantic storyline to coincide with the holiday, it is still interesting to see Rick Castle and Kate Beckett being reunited secretly.

Rick heads for the court to be the key witness to a murder that happened five months ago. However, a sudden turn of events has him investigating along with Kate a possible lead to prevent a possible miscarriage of justice.

It was also the first time for the series to feature a scene inside a courtroom with an ongoing trial for a case. “I think it will be a treat for our longtime fans. It refers to several things that have happened in the last few years,” co-showrunner Terence Paul Winter told TV Line previously.

Meanwhile, episode 10 will see the dynamic duo facing possible life-threatening situations. The synopsis reads, “When the son of a Russian diplomat turns up murdered, Beckett and Castle find themselves in a dangerous game of international crime and punishment, with Castle having to entertain a jovial Russian security officer who winds up more involved than anyone planned.”

The aforementioned episode will air on Monday, February 15 at 10 P.M. EST on ABC Television Network.

In a related news, The Futon Critic also teased next week’s narrative which will have Amy Robach as guest star.

The episode is titled “The Blame Game” and will see Kate and the rest of the 12th Precinct helping Rick escape a deadly web of mind games, “Castle is captured and forced to work with strangers to solve deranged puzzles and mind games, while Beckett and the 12th Precinct must race against time to rescue Castle and catch a killer.” It will be released on Feb. 22.

'How to Get Away With Murder' cast, plot news, spoilers: Showrunner...