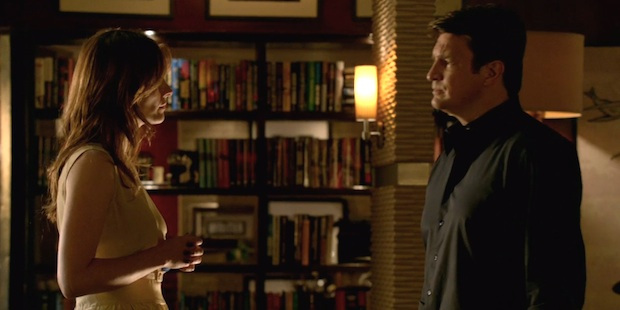 ABC’s “Castle” has just aired their fall finale and the show is going on a winter break before coming back to finish the other half of its eighth season next year. However, people are still a little bit torn on how to take the course that the story has undertaken.

Followers of the show have been a bit too frustrated with Rick Castle (Nathan Fillion) and Kate Beckett’s (Stana Katic) season long separation due to an unknown reason imposed by Kate. And while Rick has been actively pursuing his wife, Kate has been in a seesaw of emotion on whether to stay with her husband or to fully break ties with him. In the last episode aptly titled “Mr. and Mrs. Castle,” the two are finally reunited when Kate came clean on the real reason on why she insisted on a separation and have agreed to work together instead. The couple decided, however, to keep their reconciliation a secret between just the two of them so as to keep everybody safe from any lurking danger.

Showrunner Terrence Paul Winter recently explained the setup that the two main leads of the show have entered and how it will play as the season goes along. “They’re basically keeping the face of their relationship as broken up, but in secret they will be staying together. So they’ll be sneaking around and sleeping with each other, while fighting in public basically. There’s a lot of delightful sequences as to how Castle and Beckett are working cases; how they have to react to each other when they’re around Esposito, Ryan, or anyone else. It’s paid off some really wonderful dividends because of this new arrangement” he said to website Zap2It.

Nonetheless, a few fans are  not happy with how the story of the two winded down in the first half of season 8. Some even questioned the way Kate finally revealed to Rick what she has been up to and how they will tackle it from now on saying that the show would have been a lot more interesting if they have already outfitted the “playing hooky” part from the get go.

Meanwhile, fans of the show will be able to follow Rick and Kate’s story when “Castle” comes back on Feb. 1 at 10 P.M. EST on ABC.