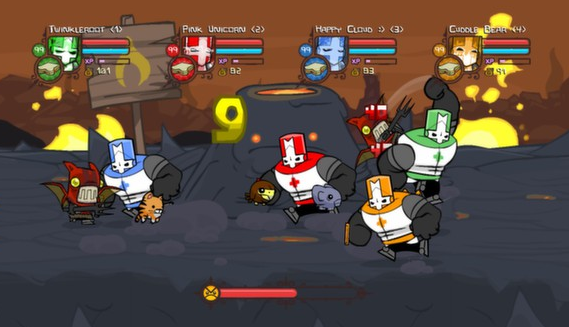 “Castle Crashers Remastered” is now available for Xbox One.

The Behemoth, developer of the “Castle Crashers” games, tweeted, “Happy Launch Day! #CastleCrashersRemastered is out now on Xbox One!”

Castle Crashers was first released on the Xbox 360 in 2008. Soon after, a PlayStation 3 version was soon made. The 2D hack and slash game has now been remastered, increasing its resolution to 60 frames per second.  The online multiplayer performance has also been upgraded so playing online can be easier.

In addition, a mini game called “Back Off Barbarian” has also been added. Special characters can also be unlocked in the game, including: King, Open Faced Gray Knight, Necromancer, Cult Minion, Blacksmith, Pink Knight, Alien Hominid, and Hatty Hattington. Animal orbs such as Pelter, Dragonhead and Golden Whale can also be unveiled.

Fortunately for former Xbox 360 owners, players can transfer their save data to the Xbox One game. Unlocked characters and animal orbs can be recovered simply by entering “player statistics” in the main menu and uploading their save from the previous console. However, gold and consumables such as dig ups, kisses, health potions, bombs, and sandwiches do not carry over.

The release of “Castle Crasers Remastered” coincides with the launch of “Lovers in a Dangerous Spacetime,” a single-player or couch cooperative action space shooter. “Castle Crashers Remastered” costs $14.99, but loyal Castle Crashers Xbox 360 players with an active Xbox Live Gold account will receive the game for free until September 20. From September 21st onwards, however, players with Xbox 360 versions of Castle Crashers will receive a ten-dollar discount, playing only $5 for the remastered game. Other Xbox One users who did not buy the original game will have to pay $14.99 for the downloadable title.

The Behemoth has also announced that Steam users will also be able to experience the remastered version in the future. The Steam update will be developed later this year.