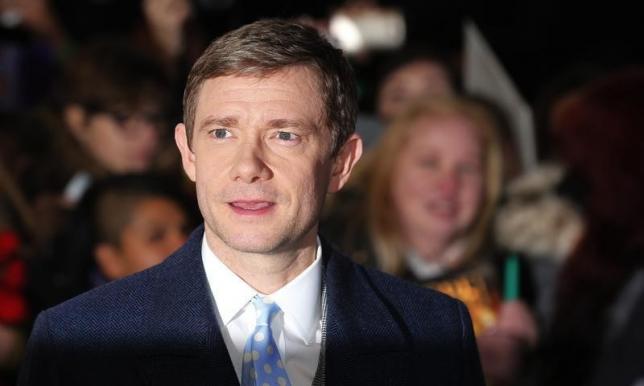 Marvel Cinematic Universe has announced earlier this year that “Sherlock” actor Martin Freeman will appear in the highly-anticipated upcoming film, “Captain America: Civil War.” Although fans still do not have a name for which character Freeman will portray, the actor recently teased some details about his role.

During Griffoni International Film Festival in Italy, Freeman teased that when it comes to choosing sides in the battle between Captain America and Iron Man, his character will be “ambiguous”.

“You’re not quite sure which side he’s on,” Freeman adds. “It looks a little bit like he’s playing one game when, actually, he’s playing another. It’s the kind of character I like because it’s ambiguous and because you don’t know whether he’s, you know, good or bad. I like that area, that isn’t black or white, I like the grays. I think there’s just more fun to be had in not playing one obvious line,” BadTaste reports.

When asked if he will utilize a Minnesotan accent like in the film “Fargo,” he replied, “No, East Coast American.”

Based on some of the hints he provided, he may either become Henry Peter Gyrich or Everett Ross.

Gyrich is a part of Commission of Superhuman Activities, a government identity that keeps Avengers accountable on the things they do. He used to prosecute them on account of treason but in his latest incarnation, he becomes an ally and helps Falcon in taking down Red Skull.

On the other hand, Ross is an American Regent of Wakanda. He plays a liaison between the mysterious powerful place and the United States government. If this comes to fruition, viewers may also see Freeman on another Marvel’s third-phase movie, “Black Panther,” expected to hit theaters in 2018.