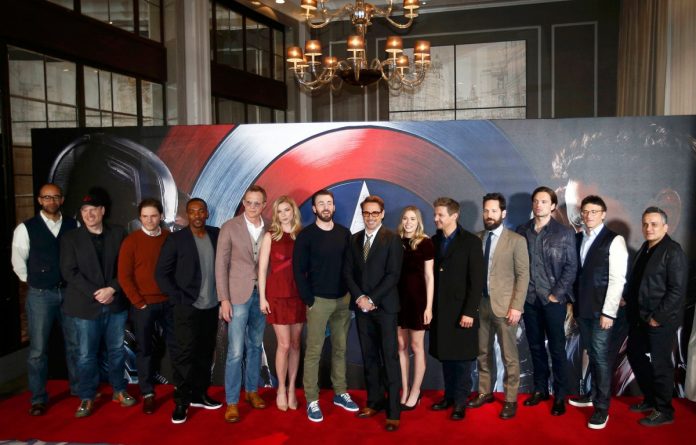 The divided superheroes gather together at the UK launch of the much-anticipated movie held at the VUE Cinema, Westfield last Tuesday night. Team Cap, which was led by Captain America himself, Chris Evans, was joined by Sebastian Stan (The Winter Soldier), Anthony Mackie (Falcon), Elizabeth Olsen (Scarlett Witch), Jeremy Renner (Hawkeye) and Paul Rudd (Ant-Man). On Iron Man’s side, Robert Downey Jr. led his pack which includes Paul Bettany (Vision) and Tom Holland as the newest Spider-Man. The event was the first outing for Holland since landing the part of the web-slinging superhero. Emily VanCamp (Sharon Carter) and movie villain, Daniel Bruhl (Baron Zemo) were also present.

The night followed a series of promo junkets in London for the whole cast and crew. A grand press conference with everyone joining the panel was also held where directors Joe and Anthony Russo as well as Marvel Studios President Kevin Feige sat down for an open Question and Answer portion.

The session was marked as the first interview with all the characters as throughout the promo tour, the group was divided to Team Cap and Team Iron Man. The cast was even split into two with Evans and his team flying to Singapore, while Downey and his own group traveled to Germany to hold separate meetings with the media and fans.

The juggernaut movie which pits Captain America and Iron Man against each other will not be opening in the U.S. until next week. However, reports already suggest that it is looking at $200 million sales gross upon its release. Disney, on the other hand, is being more modest about it, projecting only a $175 debut domestically.

Elsewhere, “Civil War” is slated to roll out in some international theaters over the weekend. The early release covers France, Mexico, Japan, Spain and German which is about 63 percent of the overall global box office market.

Marvel started their promotional tour for the movie a bit early starting with a media screening almost a month before its theatrical release. As of now, “Civil War” has been enjoying mostly positive reviews from people who have seen it driving both Marvel fans and casual movie goers to see the superhero flick.

“Captain America: Civil War” is the 3rd standalone adventure for Captain America and 13th overall project for the Marvel Cinematic Universe (MCU). It makes its grand debut in the U.S. on May 6.