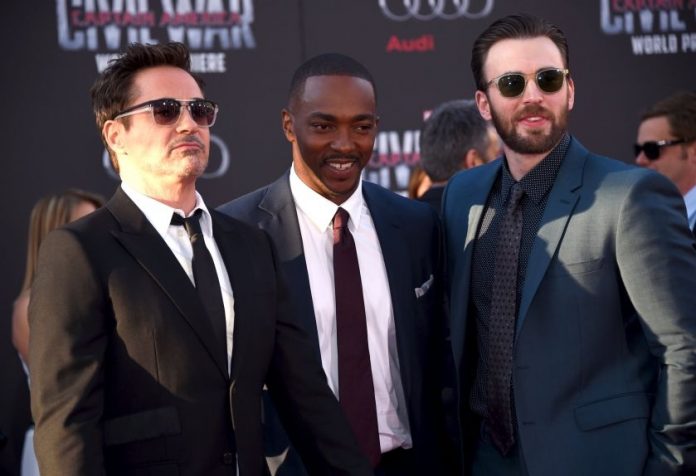 After holding an early screening for a handful of lucky media people, Marvel finally unveiled “Captain America: Civil War” with an epic premiere night that appropriately set up the superhero square off.

The event was held at the El Capitan Theatre, the same venue where Marvel Studios President Kevin Feige first confirmed that Cap’s third movie will take on the “Civil War” story almost two years ago. While all of the characters in the movie were not present in the affair, the main players all turned up including Captain America (Chris Evans) and Iron Man (Robert Downey Jr.).

Before the screening, the introduction of key players in the movie was done by no less than iconic boxing announcer Michael Buffer, which only added to the intense buzz the auditorium was ringing with. Paul Rudd (Ant Man), Anthony Mackie (Falcon), Emily VanCamp (Agent 13) and Sebastian Stan (The Winter Solider) appeared for Team Captain America, while Don Cheadle (War Machine) and Paul Bettany (Vision) showed up for Team Iron Man. Other characters present were Daniel Bruhl (Baron Zemo) and Frank Grillo (CrossBones). Tom Holland, who plays the new Spider-Man, did not appear but was spotted in the red carpet. Stan Lee was also present during the occassion.

The Hollywood Reporter was able to talk to some of the pivotal workers that brought “Civil War” to the big screen during the premiere night starting with writers Christopher Markus and Stephen McFeely.

“We line up what they get paid and proportioned their lines accordingly,” joked Markus referring to the way they were able to cram all the characters in the movie to tell a cohesive story. McFeely, on the other hand, admitted that the job was tough saying, “It’s tough because you look at the ninth person on the call sheet and they have two Oscars.”

“You just have to be true to the characters,” Mcfeely seriously added citing Robert Downey Jr.’s “hands on” approach to developing his character. “There is no better expert on Tony Stark,” he quipped.

As of now, the movie has been flooded with great reviews coming from those who were present in the early screening as well as in the premiere night, with directors Joe and Anthony Russo getting a lot of the credits for.

“These movies keep gaining more and more audiences as they go, so what that tells you is that new people keep coming to these,” explained Anthony to the same media outlet.

“The first ‘Iron Man’ movie was directed 10 years ago, and we didn’t come to Marvel until two years ago, so as filmmakers we came to the series mid-stream. We are very sensitive to the fact that new people who come to the MCU still need to digest it and enjoy it the same way everybody else can,” he further said.

“Captain America: Civil War” will have its theatrical release on May 6.

'Pirates of The Caribbean: Dead Men Tell No Tales' will see...