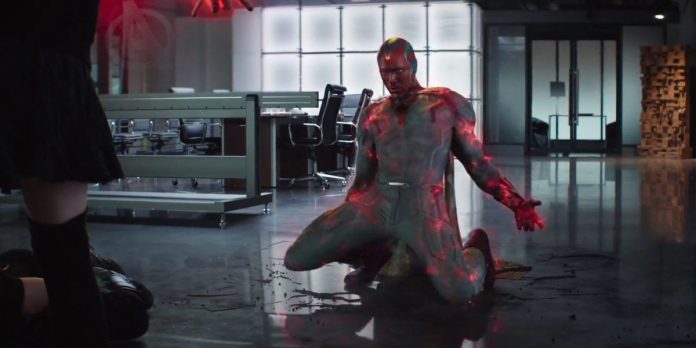 When the second full trailer of Marvel’s “Captain America: Civil War” was unveiled, one of the most interesting sequences was that of Scarlett Witch (Elizabeth Olsen) attacking Vision (Paul Bettany) causing the powerful android to get down on his knees.

For diehard Marvel followers, it is not a secret that the two superheroes have a romantic relationship, at least in the comics. Fortunately, it looks like fans will be treated to the two’s chemistry in the movie as well as Olsen revealed to Entertainment Tonight Online that there will be sparks flying between her character and Bettany’s in the upcoming film.

“You learn a little bit more about what connects [Scarlet and Vision] in this film,” the 27-year-old actress spilled. “And I think there’s some really sweet moments between Paul and I, and it’s more about how they relate to one another and their similarities just based on their superpowers.”

Bettany has been part of the Marvel Cinematic Universe since the first “Iron Man” movie in 2008 providing the voice for Tony Stark’s (Robert Downey Jr.) trustee AI assistant JARVIS. However, it was not only until last year’s “Avengers: Age of Ultron” where he came alive in the flesh as Vision. Olsen, on the other hand, made her first splash in the ever expanding universe through “Age of Ultron,” converting into one of the new Avengers after the events in her hometown of Sokovia.

It is interesting to find out how directors Anthony and Joe Russo will be able to cram Scarlett Witch and Vision’s sub-story in the juggernaut movie. And shall the movie go down that path, the divide between the two will also be equally fascinating. Based on the promos, The Witch’s allegiance is with Captain America (Chris Evans) while as expected, Vision will be with his creator, Iron Man.

Aside from the two characters’ romantic connection, another plot point being discussed is the amount of power Scarlett Witch has to be able to give Vision, an arguably indestructible character and keeper of one of the Infinity Stones, a beating. Looking more closely in the screen shot of the aforementioned encounter (photo above), it also looks like an unconscious character is  present in the scene which is assumed to be Hawkeye (Jeremy Renner).

“Captain America: Civil War” will hit on theaters May 6.