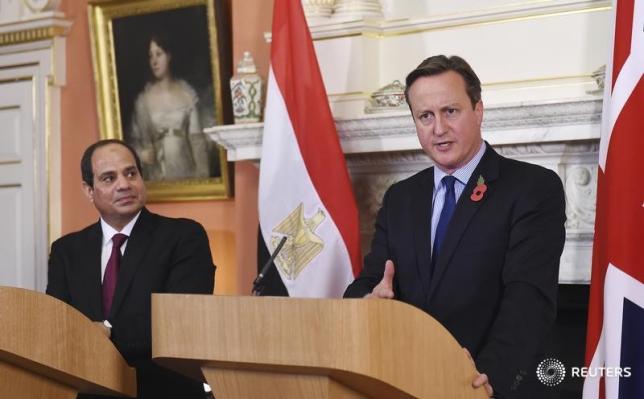 British Prime Minister David Cameron said on Thursday it was increasingly likely that a bomb brought down a Russian airliner over Egypt with the loss of 224 lives, setting him at odds with Russian President Vladimir Putin.

Britain, Ireland, Germany and the Netherlands have suspended flights to and from Sharm al-Sheikh, leaving thousands of European tourists stranded in the Red Sea resort where the doomed airliner originated.

Egypt, which depends on tourism as a crucial source of revenue, said the decision to suspend flights was unjustified and should be reversed at once. It said there was no evidence a bomb was to blame.

A Sinai-based group affiliated to Islamic State, the militant group that has seized swathes of Iraq and Syria, has claimed responsibility for the crash, which if confirmed would make it the first attack on civil aviation by the world’s most violent jihadist organization.

Moscow, which launched air strikes against Islamist fighters including Islamic State in Syria more than a month ago, says it is premature to reach conclusions that the flight was attacked.

In a telephone call, Putin told Cameron it was important that assessments of the cause of the crash be based on information from the official investigation, Interfax news agency reported.

Cameron, who hosted Egypt’s President Abdul Fatah al-Sisi on Thursday for a previously scheduled visit, said: “We cannot be certain that the Russian airliner was brought down by a terrorist bomb, but it looks increasingly likely that that was the case.”

His Foreign Secretary, Philip Hammond, said it was “a significant possibility” Islamic State was responsible, given a range of information, including the claim of responsibility.

Britain said it was working with airlines and Egyptian authorities to put in place additional security and screening measures at the airport to allow Britons to get home. It hoped flights bound for Britain could leave on Friday.

If a bomb brought down the Airbus A321, that would devastate Egypt’s tourism industry, still recovering from years of political turmoil. Shares in holiday companies Thomas Cook and TUI Group fell.

U.S. Representative Michael McCaul, the Republican chairman of the House Homeland Security Committee, said on Fox news that evidence so far indicated an Islamic State attack “with an explosive device in the airplane”.

While Egypt has bristled at the suspensions of flights, Sisi said during his visit to London that he understood countries’ concerns about safety. He said Cairo had been asked 10 months ago to check security at the airport in Sharm al-Sheikh.

“We understood their concern because they are really interested in the safety and security of their nationals,” he added.

Dmitry Peskov, a spokesman for Putin, said Russian planes were still flying to and from Sharm al?Sheikh.

“Theories about what happened and the causes of the incident can only be pronounced by the investigation,” Peskov said.

Security experts and investigators have said the plane is unlikely to have been struck from the outside and Sinai militants are not believed to have any missiles capable of striking a jet at 30,000 feet. Russia’s Kogalymavia airline, which operated the crashed plane, said three of its four remaining A321 jets had passed Russian safety checks, while the fourth would be checked shortly.

Russia on Thursday began burying some of those killed in the crash, which could affect strong public support for the Kremlin’s air strikes in Syria.

In St Petersburg, the intended destination of the doomed flight, friends and loved ones bade farewell to 31-year-old Alexei Alexeyev, who worked for a heating and ventilation company and had been returning from a holiday.

Islamic State has called for war against both Russia and the United States in response to their air strikes in Syria.

The hardline group, which also has a presence in Egypt’s neighbor Libya, is waging a campaign of suicide bombings and shootings in Egypt designed to topple the government.

A senior Russian lawmaker said Britain’s decision to stop flights from Sharm was motivated by London’s opposition to Russia’s actions in Syria.

“There is geopolitical opposition to the actions of Russia in Syria,” said Konstantin Kosachev, a senior member of Russia’s upper house of parliament, when asked about Britain’s decision, in comments reported by RIA news agency.

At Sharm airport, security appeared to have been tightened on Thursday with security forces patrolling the terminals and not allowing drivers, tour agents or others to loiter while awaiting tourist arrivals, a witness said.