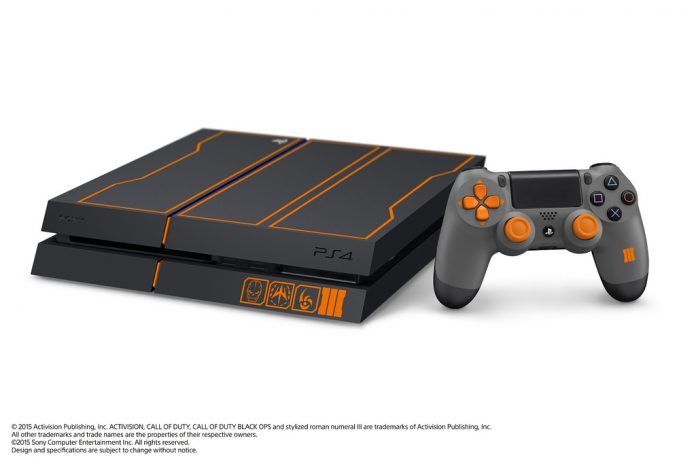 On November 6, fans of the “Call of Duty” game series will be able to play the latest sequel “Call of Duty: Black Ops III” on the PlayStation 4 in a limited edition bundle.

On the official PlayStation Blog, John Koller, Vice President of Platforms Marketing, Sony Computer Entertainment America, wrote, “This PS4 features ‘the Call of Duty: Black Ops III’ ember orange logo on a Jet Black chassis, complete with colored power and eject buttons, as well as three emblems on the front each representing a game mode the SOG Skull signifies campaign, the Winslow Accord faction logo is pulled straight from the game’s fiction, representing one of the factions you play in multiplayer, and ‘the mark’ denotes zombies.”

Aside from the console design, the DualShock 4 will also feature the colors of the game. For those who want to get another controller with the limited edition design, standalone ones will be available in the market as well.

The first in North America, this edition of the PS4 will come with a 1TB hard disk drive. According to PC Mag, this will allow enough storage for the upcoming DLC that will be available 30 days earlier on the PlayStation than on other gaming platforms.

A bonus DLC NUK3TOWN multiplayer map also comes with the console and other select platforms for a limited time only.

In addition, sharing saved in-game videos is made easier with the 3.00 system software update. This also allows players to share short clips to their Twitter accounts.

Rob Kostich, Activision’s GM of Call of Duty, said through the PlayStation Blog that their partnership with the PlayStation Nation and Treyarch was a phenomenal success. In fact, the beta for “Black Ops III” was the largest the company ever launched.

Price for the “Call of Duty: Black Ops III” Limited Edition PlayStation 4 Bundle will start at $449.99 in the United States. In Canada, the bundle will cost $549.99 CAD. Pre-order are already open.