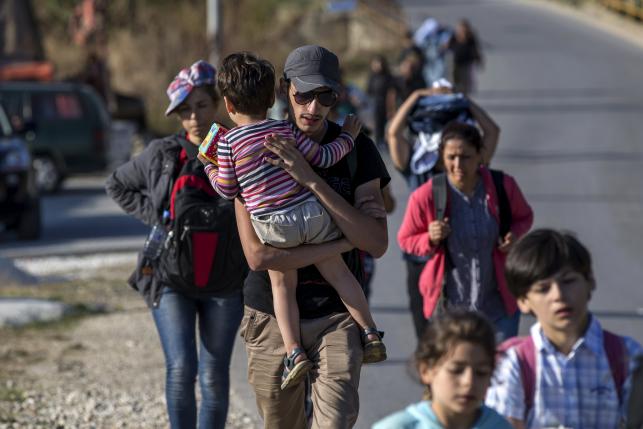 Thousands of migrants, many of them refugees from Syria, surged through the Balkans on Monday en route to western Europe, riding by boat and bus in an organized effort by cash-strapped governments to move them on as swiftly as possible.

Eight thousand poured into Serbia in the space of 24 hours, trekking five kilometers (3 miles) from the border to a reception center in the town of Presevo, where a Reuters reporter counted 25 buses waiting to carry them north. A one-way ticket cost 25 euros. Buses left every few minutes.

Extra trains and buses ran regularly too from Macedonia’s southern border, which has been inundated since Greece began ferrying migrants from islands to the mainland at a rate of 2,500 per day.

A record 50,000 hit Greek shores in July alone, straining the resources of a country going through one of the worst economic crises of modern times.

In Serbia, state authorities and aid agencies threw up tents and scrambled to supply food, first-aid and papers legalizing their transit through the country as far as Hungary and Europe’s borderless Schengen zone.

Many of those arriving had spent three desperate days on Greece’s northern border after Macedonia halted their passage saying it could take no more. But on Saturday, crowds braved batons and stun grenades to storm through police lines.

“My clothes are still wet from Macedonia,” said 20-year-old Mohamed Ahmed from Syria. “I tell Europe, ‘Don’t be afraid.’ We are not a danger, we are humans. We are coming from wars and we just want to start a new life.”

Fleeing war and poverty in the Middle East, Africa and Asia, they carried their belongings in rucksacks, children hoisted onto shoulders and wearing hats to shield them from the August sun. After a chilly night, daytime temperatures were expected to be near 30 degrees Celsius (86F).

“I just want to cross to continue my journey,” said Ahmed, also from Syria. “My final destination is Germany, hopefully.”

Not since the wars of Yugoslavia’s collapse in the 1990s has the cash-strapped western Balkans seen such large movements of people, when many Bosnians, Croats, Albanians and Serbs displaced by fighting fled for the rich countries of Europe – the likes of Germany, Austria and Sweden.

The problem threatens to get worse as EU member Hungary, part of Europe’s borderless Schengen zone, races to complete a fence along its 175-km border with Serbia to keep the migrants out, threatening to create a dangerous bottleneck.

The European Union, the migrants’ only destination, has struggled to formulate and implement a common policy.

Kurz criticized the Greeks, whose borders form part of the EU’s external frontier, for failing to process asylum requests on Greek soil as per EU rules. On Monday, two people drowned and five were believed missing when a dinghy carrying migrants capsized off the Greek island of Lesbos, where aid groups say 1,500 have been arriving daily for the past week.

The Greek government has chartered a car ferry to collect them from the islands and bring them to the mainland on a daily basis. It carried 2,500 people, mainly Syrians, on Monday to Athens, where buses awaited to take them north.

“It is not just a case of Greece not processing those (asylum) claims, but they are actively doing their very best to get the refugees to move on to central Europe as soon as possible,” Kurz said.

“The Western Balkan countries are overrun, overwhelmed and have been left to their own devices,” Austria’s APA news agency quoted Kurz as saying. “We have to help them.”

Germany says it expects a record 750,000 asylum-seekers to arrive this year, in a crisis overwhelming authorities in Europe from the Greek islands to the French port of Calais.

Many have undertaken dangerous journeys across sea and land in search of safety and employment in the affluent nations of western and northern Europe.

Asked how aid agencies and authorities were handling the influx, Ivan Miskovic of Serbia’s Commissariat for Refugees and Migration said: “They’re coping somehow so far.”