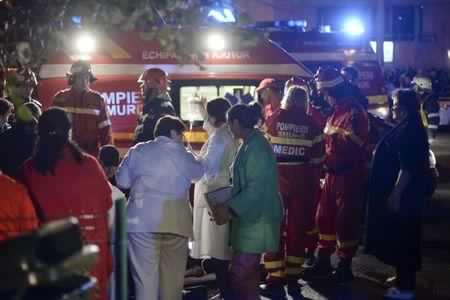 A raging fire inside nightclub Collectiv in downtown Bucharest was sparked by a pyrotechnics display during the performance of heavy metal band Goodbye to Gravity at a Halloween party Friday. An estimated 400 people were inside, according to a Sky News report. Twenty-seven were reported killed and more than 180 were treated for smoke inhalation, severe burn injuries and lesions in 10 hospitals around the city as well as at a mobile hospital set up outside the scene of the fire where many were being resuscitated.

In a report by Associated Press, the initial word from the Interior Minister Gabriel Oprea had been of an explosion at the said nightclub. It was later confirmed by the fire rescuers that no explosion had occurred, only a fire.

Some witnesses told Digi 24 television station that the flames were thought at the start to be part of the show so that people did not react right away, until the polystyrene decor caught fire. The venue, formerly a Communist-era factory, had only one exit, and people began to panic and rush to get to it, Antena 3 TV reported.

A man who had lost his shoes while escaping the scene told Reuters, “There was a stampede of people running out of the (Colectiv) club.”

This disaster is said to be one of the worst to happen in Bucharest for decades. Sixty ambulances had responded to the call and within 11 minutes, the first ones had arrived on the scene.

The incident is already being investigated, Oprea said, while Deputy Interior Minister Raed Arafat’s statement appears on Yahoo News, saying,”The situation is slowly stabilizing … we have many people with burns, intoxicated with smoke and people squashed.”

He added that many of the victims have no identification so it is taking some time to identify them.

“I want to assure you of all support from rescuing forces and ask you to trust they put all efforts to limit the impact of this catastrophe,” he said.

This was the parting statement from Romania’s President Klaus Iohannis appearing in the Reuters report on Yahoo News.