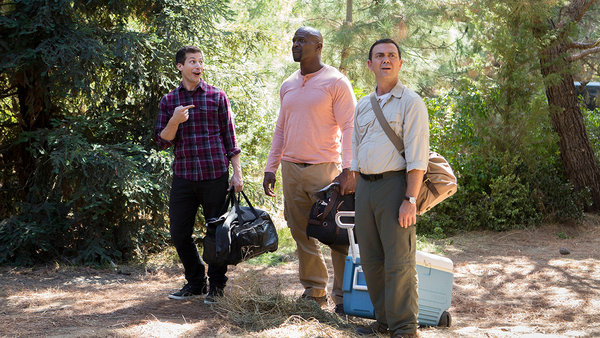 Fox’s “Brooklyn Nine-Nine” season 3 opened with a new captain taking over for Ray Holt, but the usual mayhem becomes too much for Terry Jeffords (Terry Crews). A quarter of the way into the season, it comes as no surprise that he is nearing boiling point. Terry has been trying to handle a stressful family life with toddler twins and another baby on the way, not to mention his mounting paperwork at the precinct.

In the last episode of “Brooklyn Nine-Nine,” episode 6, which aired on Nov. 8  and titled “Into the Woods,” Jake Peralta (Adam Samberg) and Charles Boyle (Joe Lo Truglio) decided to take Terry on a trip to the woods to help him relax. However, things quickly took a turn for the worse as Jake characteristically left out the planning stage for the trip. Luckily for them, Charles was there to bring some humor, especially as they entered the most desperate situation during their camping trip, falling into, well, a hole, not a pit.

All in all, the trip was not what the trio expected. Terry summed it up by calling Jake a shirker. It seems that Jake needs to seriously pull himself together and take responsibility for his actions.

Back at the precinct though, things were a bit snappier. Holt (Andre Braugher) gave relationship advice to Rosa Diaz (Stephanie Beatriz) when it appeared her relationship with Holt’s nephew Marcus was not working out. Gina Linetti (Chelsea Peretti), meanwhile, helped Amy Santiago (Melissa Fumero) for an important presentation as the latter prepared to make a new product pitch to the department and enlisted the former to assist her in making it less boring.

“Brooklyn Nine-Nine” continues to follow this team of detectives from the fictional 99th precinct of Brooklyn’s New York City Police Department in the following episodes, “The Mattress” which will be the seventh episode, and “Ava,” the eighth.

“The Mattress,” airing on Nov. 15, brings Jake and Amy together, working on a case of a new street drug as they find out their relationship is getting in the way of work. Charles damages one of Holt’s valuable possessions, while Terry teaches Rosa some discipline.

In “Ava,” Jake is left in charge of Sharon, Terry’s pregnant wife, while Terry goes out with Rosa on the case of the Douglas Street murders. Panic ensues when Sharon’s water  breaks while at the precinct. In this episode, Amy and Charles handle paperwork despite power outage, and Holt has no choice but to confront his ex-boyfriend. This episode airs on Nov. 22.

'Star Trek Beyond' news: Fans might see a 'deconstruction' of franchise...