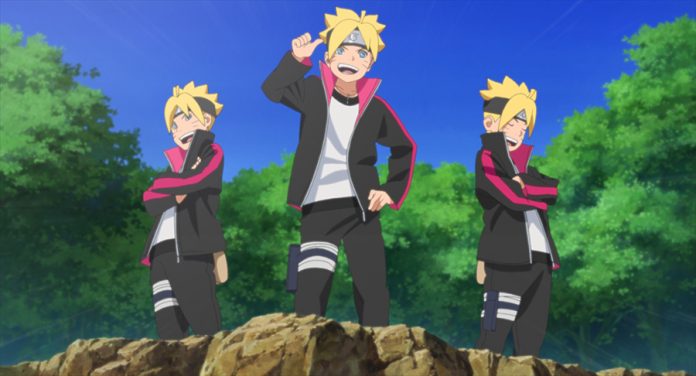 The upcoming fourth chapter of the Naruto spin-off manga “Boruto: Naruto Next Generations” might see the young son of the Seventh Hokage Naruto Uzumaki, Boruto Uzumaki, get disqualified from the ongoing Ch?nin examinations, as he was teased to have been caught cheating and with evidence of it recorded on tape.

In the most recent chapter of the manga series, the Ch?nin exams had begun. This is the same exam was that Boruto had taken part of. The exam had the participants form a group of their own, and Boruto naturally ended up having Sasuke Uchiha and Sakura Haruno’s daughter Sarada Uchiha in his team, which they decided to call Team Konohamaru.

The chapter was titled as “The Ch?nin Exams Begin!” and in the chapter, Sai and Shikamaru administered the first stage of the test, a simple true or false exam about a certain book series, with a pool of ink waiting for those who would not be getting the right answer to the questions. Boruto’s team was not able to get the answer right, but they managed to escape the pit and so they passed the first stage.

The team also passed the second stage, which involved teams getting a hold of their enemies’ flag, all the while keeping their own flag safe. However, it was not without Boruto resorting to the use of Kote to release a powerful elemental jutsu on their enemy team. This kind of technique had been banned by his father Naruto.

In the upcoming chapter, it is expected that Boruto’s cheating in the exams would not pass undiscovered, as Naruto himself would reportedly be the one to reveal what Boruto had done and issue him the punishment.

This is expected to have Boruto resent his father more, but in the end, it would teach him the lesson of being responsible and fair.

Chapter 4 of “Boruto: Naruto Next Generations” releases sometime during the first week of August.

How to Get Away with Murder season 2 spoilers: Viola Davis...