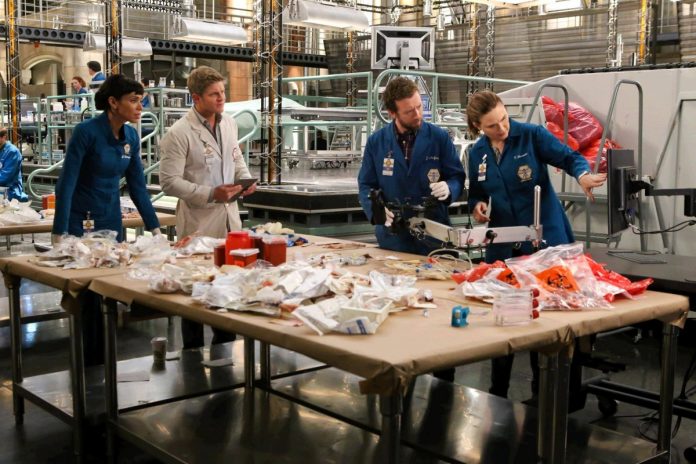 When season 11 of Fox’s crime procedural series “Bones” returns after its hiatus, the narrative will pick up from the midseason’s explosive finale featuring Dr. Jack Hodgins (TJ Thyne) adjusting to his new condition.

Titled “The Death in the Defense,” the synopsis of episode 11 suggests that Hodgins will be eight weeks into his rehabilitation following the event that caused him to be paralyzed. He will be forced to navigate his way on a wheelchair.

On the other hand, Temperance Brennan (Emily Deschanel) and Seeley Booth (David Boreanaz) will tackle the case involving the death of a public defender. Their investigation will lead them to believe that the attorney had multiple defendants from previous cases who have motives to kill her.

Down the pipeline, they will have to solve the case of the founder of a men’s rights organization who was killed in a car crash. The team believes that the person may also be a victim of domestic abuse. Brennan will take matters into her own hands. However, she uncharacteristically loses her patience and will find herself in a disagreement with the organization’s co-founder who claims that middle-aged white men are oppressed and feminists are man-haters.

Meanwhile, Angela Montenegro (Michaela Conlin) and the rest of the squad will struggle to deal with Hodgin’s change of attitude as he becomes bitter of being on a wheelchair. Booth will also be convinced that Brennan is jinx for the Philadelphia Flyers.

Aside from new cases, fans who ship Camille “Cam” Saroyan (Tamara Taylor) and Arastoo’s (Pej Vahdat) relationship may be delighted to find out that showrunner Michael Peterson teased previously that there is a possibility for the two to reconcile their romance. However, there will be things beyond the characters’ control that will test their trust for each other.

“There’s always hope. Coming in here, for Jon [Collier] and myself, we wanted to make sure that nobody is safe. We’re going to shake things up. It’s wonderful to be on a show for the 11th season, but we want to make sure we play with everybody’s expectations and you keep watching every week because who knows what’s going to happen?” Peterson said.

'Frozen 2' rumors: Sisters may duet with each other, story touches...