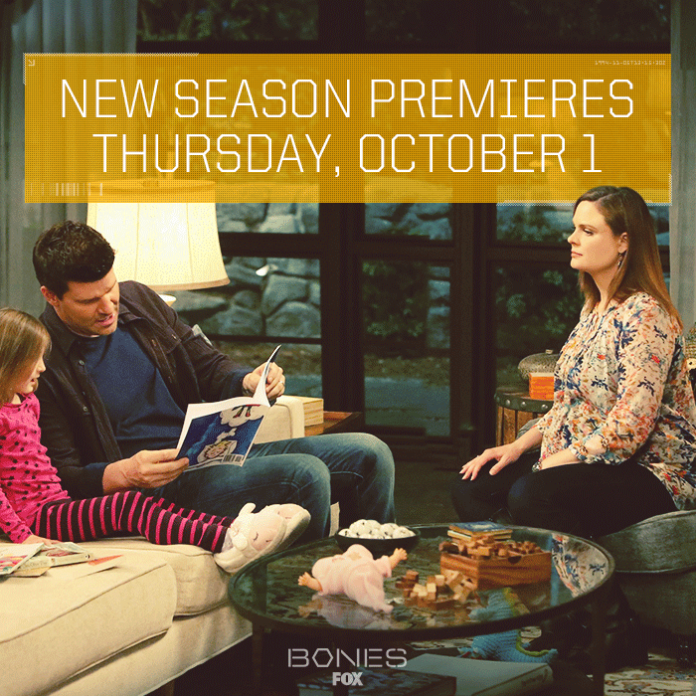 Viewers of Fox’s long-time running procedural show “Bones” may see Brennan and Booth back at Jeffersonian lab when the series returns on October 1 for season 11.

According to the network’s official press release, the story will pick up six months after the events of Season 10’s finale but a murder “unlike any other” will draw them back to lab and the FBI, along with their former colleagues.

Outgoing showrunner Stephen Nathan previously told The Hollywood Reporter that the time lapse between the two seasons will serve as a way to let the characters develop more.

“We will be picking them up as they have been living a life that they have been wanting to live. From that they’ll have to go back to the lives they had before, and clearly they will be different people and different circumstances will allow us to continue in a new life,” he said.

He said that when the couple returns to the lab, they will see a change in the dynamics of the workplace.

“When Booth and Brennan return, life has gone on without them. People have become entrenched in a new structure, a new social order. Time doesn’t stop. You can’t go back and pick up where you left off. You can only pick up from where you are at any given moment. That’s going to have a lot of great conflict and a lot of surprises for the characters and the audience,” he added.

Meanwhile a crossover even with “Bones” and science-fiction series, “Sleepy Hollow” is confirmed to happen later in the season.

TV Line first teased the news and said that the crossover was originally slated for a fall release. However, due to some logistical issues, it was postponed to a later schedule.

Although no details have been revealed on which characters will appear or interact in the crossover, the report added that the executive producers are working on some ideas that will naturally combine the different worlds together.

E! News confirmed the announcement and offered some possible theories on how the crossover will play.

The report suggested that Bones may come across an artifact which will put her back in the old times and she will try to communicate with Booth. It is also possible that they find a body that is inhuman and which is being tracked down by Abbie and Ichabod.

However, the report noted that given the many probable scenarios, the four lead characters may simply interact with each other in few scenes.