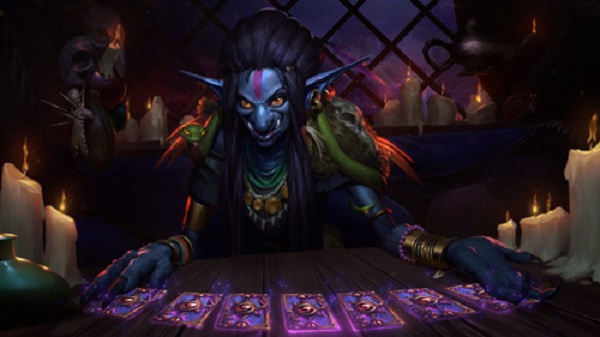 Developer and publisher Blizzard Entertainment recently announced a new expansion for its online collectible card game “Hearthstone.” The expansion is called “Whispers of the Old Gods” and will be available in April or May.

The Verge notes “Whispers of the Old Gods” is similar to previous expansions before it. It will have a whole bunch of new cards that are all tied to the lore of “Warcraft.” The theme for the latest expansion revolves around the awakening of sleeping ancient, god-like evils who have started to corrupt the world.

The third “Hearthstone” expansion will include 134 cards in total, four of which are old gods C’Thun, Yogg-Saron, Y’Shaarj, and N’Zoth. Players will get the 10-mana 6/6 C’Thun and two Beckoner of Evil cards when they begin playing the expansion. The latter is among the 16 new cards that will reportedly interact with C’Thun in some way.

In addition, Blizzard has revealed eight other cards as of this writing. There’s the five-mana 6/6 mech Corrupted Healbot, Twilight Elder, Stand Against Darkness, Eater of Secrets, Giant Sand Worm, and Hogger, Doom of Elwynn. Corrupted versions of a couple of classic cards are also available. Loot Hoarder is now Polluted Hoarder and Doomsayer is now Validated Doomsayer.

“Hearthstone’s” Whispers of the Old Gods is now available for pre-purchase. The pre-order will include a 50-pack bundle plus a new card back as a bonus for $49.99. The expansion is slated to arrive to Windows, Mac, iOS, and Android devices by late April or early May.

Prior to that Blizzard has promised to reveal more information regarding the upcoming expansion on March 21. The company is also expected to showcase all 134 cards before the expansion’s release date.

Aside from Whispers of the Old Gods, Blizzard is also expected to roll out some big changes to the game. The company will be introducing a new Standard mode to “Hearthstone.” This new mode renders obsolete older expansions.