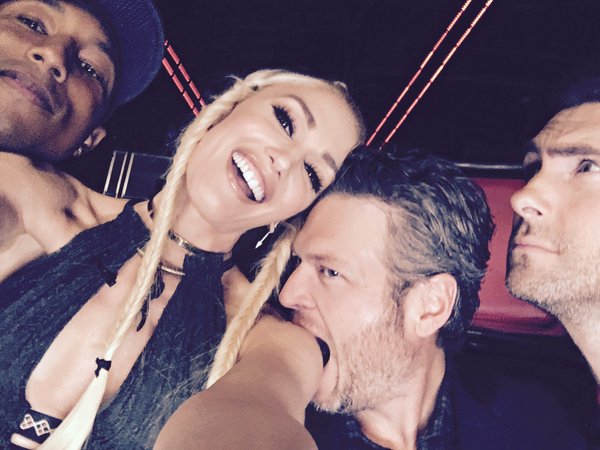 Love is in the air between Blake Shelton and Gwen Stefani as they have been enjoying spending quality time together lately.

The coaches of hit singing competition “The Voice” have been photographed having a romantic night out at Casa Vega Mexican restaurant in Studio City, California. A source exclusively told E! Online that the pair was with another couple, and they seemed cozy with each other’s company. “They were sitting at the bar and were very affectionate during dinner. He had his arm around her, [and] they had margaritas. After dinner they left together and went to her house,” the source said.

The source added that while waiting for their car, the two engaged in some public display of affection, “He kissed her twice and was pretty much grabbing her b*** as he did. He was square dancing to amuse the group, and Gwen joined in for a bit, too.”

They were also recently seen inside a car and laughing over something hilarious on the way to Stefani’s house, few days after dining out.

It was not the first time that the singing duo engaged in som PDA in front of the cameras. While filming one episode of the “The Voice” and during the introduction of the coaches, Stefani ran into Shelton’s arms while the latter swung her around for a bit.

Stefani also took it to her Twitter to post an adorable photo of them alongside Adam Levine and Pharell. Shelton sat beside her, hilariously biting her shoulder.

Despite seemingly being comfortable with their relationship, the two remained coy when asked directly about their status. In an interview with Natalie Morales of “Today,” the host inquired if it is good to be out in the open now, to which they replied with only a laugh. Levine also came to the rescue of the lovebirds, humorously singing out a tune with the lyrics saying “Next question.”