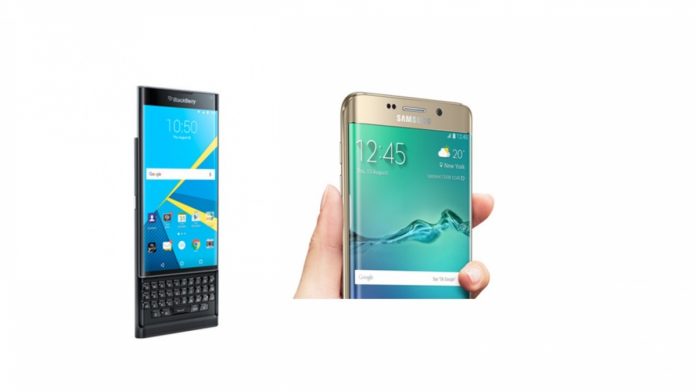 BlackBerry has recently launched its latest Android-run device, called BlackBerry Priv, expected to compete with mainstream industry players. It has taken on a curved edge design that was similarly seen on Samsung’s Galaxy S6 Edge+, so it may be worth comparing how the two devices fare with each other not just on its exterior design, but what they bring under their hoods.

BlackBerry Priv used a metal frame with a fiberglass finish for the device. It looks sleek and professional, just about right for its target market of mostly business users. It comes with a 5.4-inch AMOLED screen display with 1440×2560 pixel resolution at 540 pixels per inch.

BlackBerry Priv runs on a hexa-core Qualcomm Snapdragon 808 chipset and Adreno 418 for its graphics. It houses 3GB of RAM and an internal storage of 32GB, which can be expanded up to a whopping 2TB through microSD.

As for its camera, BlackBerry Priv boasts an 18-megapixel main shooter with phase-detection autofocus features, along with a 2-megapixel secondary snapper. Its camera has received an overall score of 82 from DxOMark, one of the most cited body for digital photography. This rating makes the device at level with the camera of Apple’s iPhone 6S.

Cost-wise, the devices are relatively at the same range, with BlakcBerry Priv sold at $250 with a two-year contract, while Samsung Galaxy S6 Edge+ retails at $299. BlackBerry has made a good entry for its newest Android-run device and may be a good option for those who are looking into a fresh handset. On the other hand, as Samsung is one of the industry leaders of the smartphone field, its flagship is almost always a safe choice.

Nokia OZO VR price: pre-orders kick off but it will set...