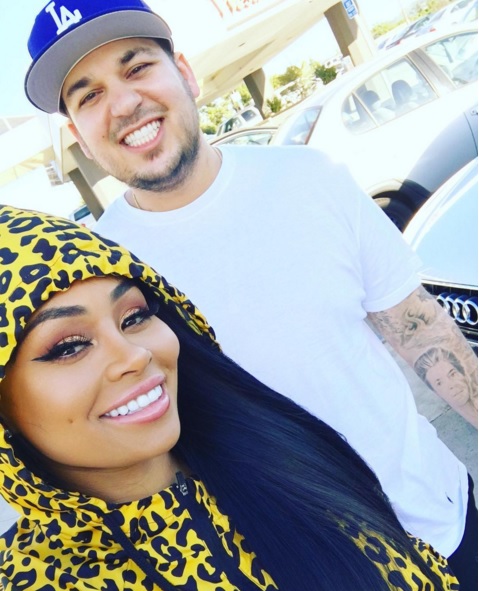 Blac Chyna was spotted with Rob Kardashian and his sister Kim heading to the latter’s OB-GYN, creating rumors that the newly engaged couple is expecting a baby. It also looks like the Kardashian sisters have become friendlier to Chyna despite the issues surrounding her after being involved in the affairs of the family.

Rob and Chyna were engaged early of April, and the Kardashian family was allegedly not happy about the upcoming wedding. Particularly very bothered was Khloe Kardashian who reportedly kicked her only brother out of the house because of Chyna’s relationship to Tyga. Rapper Tyga is the father of Chyna’s son, King Cairo, and has been in a relationship with Kylie Jenner’s since 2014. Khloe allegedly said that she was going to ignore the news of the engagement.

Kim Kardashian was also Chyna’s best friend and ever since the engagement, the younger sisters are following her lead and have been more welcoming towards the new addition to the famous family. A source reportedly told Hollywood Life that Kim referred Chyna to the doctor, who she consulted to for her infertility issues. Last month, some people believed that Chyna was developing a baby bump, which could be one of the reasons why the family has started to accept her into the family and Rob’s hasty wedding proposal with a $325,000 ring after just three months of dating.

Tokyo, Chyna’s mother also expressed her opinion regarding her daughter’s alleged pregnancy in an interview with Daily Mail.

Tokyo, real name Shalana Hunter, who is a former stripper and now owner of talent scouting business “On My Grind Entertainment and Promotions” revealed that the baby might come after the wedding and stressed that the Kardashians should put aside any ill feelings towards Chyna when that particular time comes.

She also mentioned that she prefers Rob over Tyga saying, “‘He [Rob] spends hours playing with King and he buys him lots of toys.” She also added, “Their favorite thing is playing a numbers game with Lego. It’s great practice for him for when he and Chyna do have a baby. He’s training to be a dad himself.”