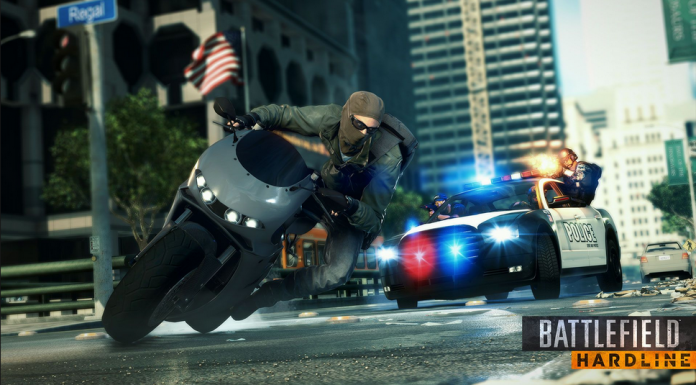 Battlefield Hardline’s first expansion will be released on June 16 for premium users, while non-premium members will be able to see it at the end of the month.

Battlefield Hardline will have four expansions planned over the next year. The first one, to be released next week, is Criminal Activity, which features fast-paced and highly destructible maps. The weapons included will be more on close quarter combat. Criminal Activity buyers get to have new weapons such as new battle rifle for criminals, nail gun for both criminals and cops, and assault rifle and bullup shotgun, both for cops. They also get to see new equipment in the form of breaching rounds and armor piercing tracer rounds for both cops and criminals as well as low rider and pick-up trucks as part of the new vehicles. Nonetheless, non-premium players will also get new submachine gun for both cops and criminals.

According to VG 24/7, the nail gun has 10 nail capacity and four magazines which can be found all throughout Criminal Activity. The same review indicated that players should keep an eye on this weapon as a quiet weapon and threatening in close-quarter combats.

Other expansions expected include Robbery, also to be released summer this year, where players get to face their enemies head-to-head before they progress to the different key locations. In addition, Getaway, targeted to be released autumn this year, is a high way chase and theft, and Betrayal in winter 2016 highlighting disloyalty among the players. Fans have the option of buying these expansions one at a time but there is also an option of purchasing at once through the Battlefield Hardline Premium pack. For the premium pack, the player gets to have additional 12 Gold Battlepacks, personalization options which includes gun camos and ammo skins, access to premium events, priority in server queues, and two weeks earlier access to the expansions aside from the inclusion of the four expansions.