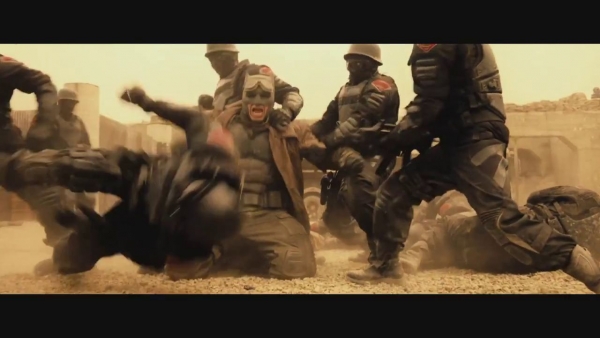 Director Zack Snyder has released a new trailer for the battle of DC Universe’s superheroes, “Batman v Superman: Dawn of Justice” at San Diego Comic Con and aside from titular characters, it also features for the first time the theatrical look of Wonder Woman and Lex Luthor.

The sneak peek revealed that Batman played by Ben Affleck has gone with vigilantism when he was personally and professionally affected by Superman’s actions at the climactic battle with Zod on 2013’s film “Man of Steel.”

Portrayed by Henry Cavill, Superman is being question by a senator when people from Metropolis begin to rally about their beloved hero’s true intentions. However it turns out that the senator may have an ulterior motive as she was depicted to be in communication with Jesse Eisenberg’s Lex Luthor.

Moreover, channeling his rage, the Caped Crusader confronted the Kryptonian. In a series of cinematic battles in different locations such as the city and desert, Gal Gadot as Wonder Woman flew in between them.

Snyder said during the Comic Con panel that it will be the first time that Metropolis and Gotham will be neighboring cities, separated by a bay.

Affleck mentioned that with Metropolis being successful and Gotham described as oppressed made the scenario realistic, “The whole idea of wealth and power and how power engenders fear … made it feel real and smart to me.”

Meanwhile, photographer Clay Enos has unveiled a new photo of Batman wearing a different version of Batsuit, briefly sighted in the trailer during the desert scene.

On a closer look of the costume, Batman has goggles perched on the top of his head, scarf around his neck and a coat while he scowls at the distance.

Some reports claim that it looks like a soldier gear which is said to change depending on the need of the situation for Batman, as the trailer also showed another fully armored suit.