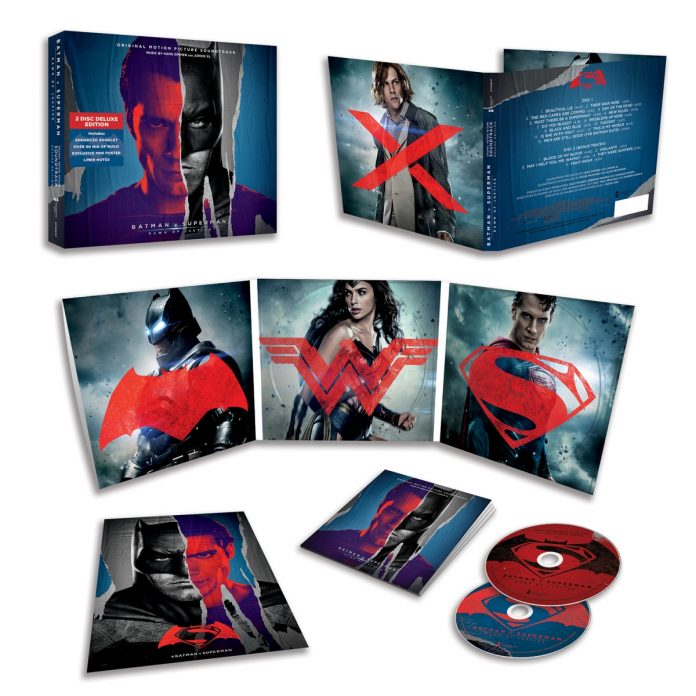 “Batman v Superman: Dawn of Justice: The Soundtrack” will be released on March 18, a few days before the film finally hits theaters worldwide. The official soundtrack will be available in digital download, the standard single CD format, a deluxe 2 CD set edition, and a Limited Edition 3-disc vinyl set.

The 2-disc deluxe set and the Limited Edition 3-disc vinyl set will both feature more than 90 minutes of the film’s music, as well as five bonus tracks, and a limited and exclusive fold-out poster featuring the trinity of Batman, Superman, and Wonder Woman as will be seen in the upcoming film. The vinyl set comes with an etched vinyl art and an album download card. The soundtrack album is now available for pre-order.

“Hans and Tom created an incredibly compelling and interesting new musical world for Batman, while continuing to expand on the amazing world and themes Hans had previously created for Superman,” commented film director Zack Snyder. “By aligning their vision with my perspective and seeing the characters anew through the lens of the film they were able to support the visual aspects of movie in a way that elevates the film to another level. In so many ways, they become the final texture, the final note in the process of creating the world.”

“Batman v Superman: Dawn of Justice” will open in theaters on March 25.