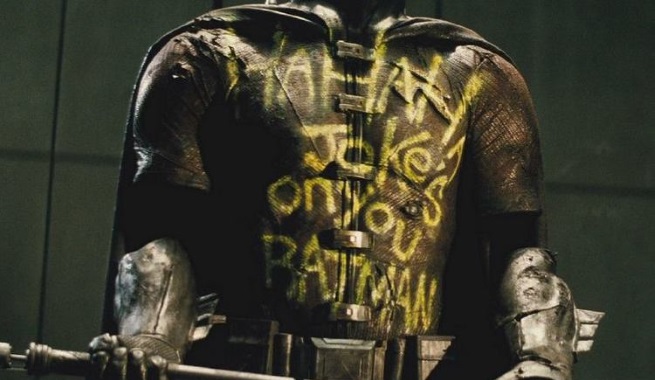 In the numerous trailers of the upcoming and much awaited film “Batman v Superman: Dawn of Justice,” fans already saw and discussed the costume that Ben Affleck’s Bruce Wayne is keeping inside his Batcave. Now, DC Comics have hinted and possibly confirmed rumors about the story behind the suit that was covered in graffiti.

In “Batman v Superman: Dawn of Justice,” Henry Cavill’s Superman will return, and will introduce yet another reboot of The Dark Knight of Gotham City. However, unlike most live-action versions of the Batman, the new Bruce Wayne in the DC Extended Universe will not be the kid who got orphaned and found his way to becoming the caped hero that he will beinstead, fans will see a Bruce Wayne who is past his prime years and have been through a lot of ordeals as Batman already.

Part of the past that has kept fans curious is the suit that Batman keeps inside the Batcave, which is expected to be from The Joker. The suit is covered in graffiti that says, ” Hahaha. Joke’s on you, Batman.”

In a recent interview with Entertainment Weekly, DC Comics Entertainment Chief Creative Officer Geoff Johns, who also served as an executive producer for the “Batman v Superman” film, revealed that the suit is in the Batcave for a reason. While the DC Comics executive had been careful not to give away specifics, he hinted that the suit was once from one of the most iconic allies of Batman, Robin.

“You can extrapolate that if Batman kept his suit like that, it’s a reminder,” Johns said. “He’s displayed the suit of a fallen ally, fallen friend in the center of the Batcave. It’s right there for a reason, and part of it is to fuel him to continue to do what he does.”