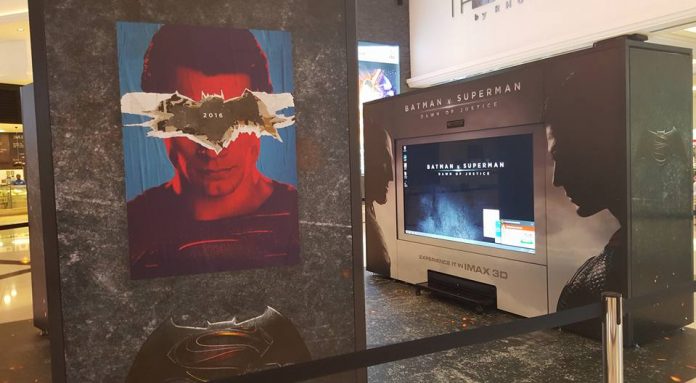 Ever dreamed of becoming a superhero? What about becoming Superman or Batman? Fans can now do so, as a film distribution company recently launched an augmented reality attraction inspired by the upcoming and much awaited film “Batman v Superman: Dawn of Justice.”

Shooting Stars LLC, a film distribution company that is based on the United Arab Emirates, has recently launched their newest attraction in connection to the highly hyped and much awaited clash of the most iconic comic book characters on the big screen. The augmented reality attraction for the upcoming “Batman v Superman: Dawn of Justice” will give theater visitors the chance to “suit up”in a wayas Batman and Superman as shown in the film.

The augmented reality experience was opened at Vox Cinemas at the Mall of Emirates in Dubai. The attraction will run a total of eight days from Jan. 8 until Jan. 16.

In the augmented reality experience, visitors would stand in front of a screen setup. First off, they would need to choose a sideas either being Batman, or take the persona of The Man of Steel, Superman. Then, images of the participants would appear on screen and would then be changed to whoever character they chose. From there, each participant can move freely, do any kind of poses and movement, and the characters on the screen would follow as if mirroring the movements. Any movement is possibleform the most serious and the most epic, to the most hilarious and the wackiest anyone could think of.

Participants should then prepare to strike their best superhero pose as possible, as later on, the setup would take a snapshot of their movements or poses.