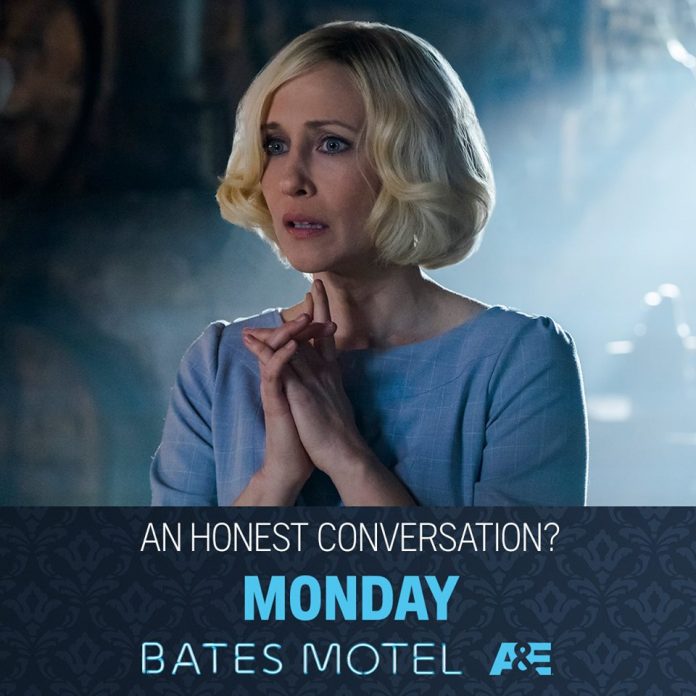 As the latest episode of A&E’s thriller drama series “Bates Motel” featured Norman (Freddie Highmore) coming home to his mother, Norma (Vera Farmiga) will be torn between him and her husband in the upcoming new installment for season 4.

Titled “Unfaithful,” the synopsis for episode 8 reveals Norman finding out that everyone seems to have taken different paths while he is out of town and having treatments at Pineview Institute. He believes people around him have changed. Meanwhile, Norma may have a tough time dealing with the situation as she has to divide herself up between Norman and Sheriff Alex Romero (Alex Carbonell).

Previously, when Norman found out that Romero is living under their roof, he decided to go home on his own accord. He also discovered that Romero basically paid him to be in the facility when he voluntarily checked himself in. Some fans speculate that with the truth out of the bag, it will be interesting to find out whether it will be good for the sheriff or not.

With only three episodes left before the current run wraps up, Highmore teased what is in store in the narrative in preparation for season 5. “We’re now sort of racing towards an end point that the writers have established. Which is incredibly exciting and there’s no holding back now. I always sort of say that every season is the best but it really is the case on this one,” he said.

“It’s the most intimate we ever get to see Norman and Norma and there’s an inevitability of their relationship. No matter what they will always have to be together. That pits Norman against Sheriff Romero this season and their rivalry develops. I guess from Norman’s perspective there’s this slightly analytical look that we haven’t done before, a deeper look at his psyche and what’s really going on under all of that and if he can be saved,” he further hinted.