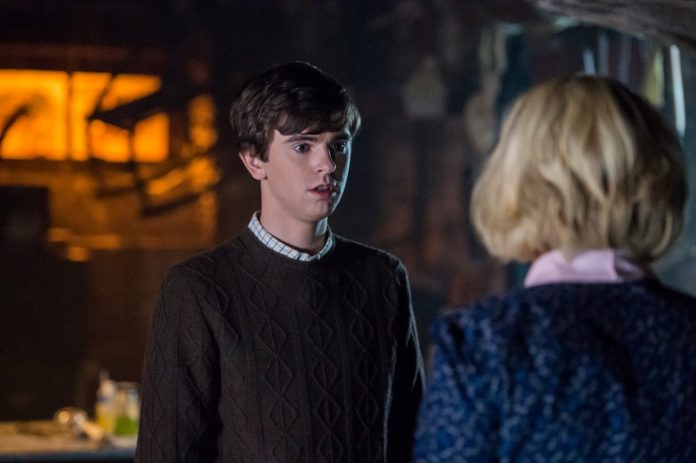 Norma (Vera Farmiga) has her suspicions that Bob Paris (Kevin Rahm) may be the one who broke in to her house during last week’s episode of A&E’s thriller drama series “Bates Motel” season 4.

In a sneak peek for the upcoming installment titled “Refraction,” Norma voices out her concern to new husband Sheriff Romero (Nestor Carbonell) as they investigate the damages done to her home.

“Are you sure we should be cleaning this up? Maybe we should dust for prints or something,” she asks Romero, to which he replies with, “They wore gloves, Norma. There are no prints,” as he tries to put things back to their original position. She then notices his statement, “They? Who’s they?” she inquires. “They, he, she, whoever it was,” he answers.

Norma becomes more frustrated saying, “Why did they have to break my favorite window? It’s mean. It’s personal. What the hell Alex, I have been so good. I’ve totally kept to myself. All I have been thinking about is Norman and getting him better. I’ve been busy marrying you. I don’t even have time to piss anyone off,” she continues.

When she suddenly says that she thinks it may be Bob, Alex assures her that it’s not him, as the situation looks like it has been done by an amateur. He further convinces Norma that the break-in may have been caused by some people in the drug trade he may have pissed off.

Meanwhile, another clip shows Dr. Edwards (Damon Gupton) trying to make Norman (Freddie Highmore) open up to him while he is in the institution as it seems like he wants to check himself out. The footage also shows a montage of his mother in what can be passionate moments before it ends with her frantically shouting, “You could destroy my life. Just go right the hell out!”