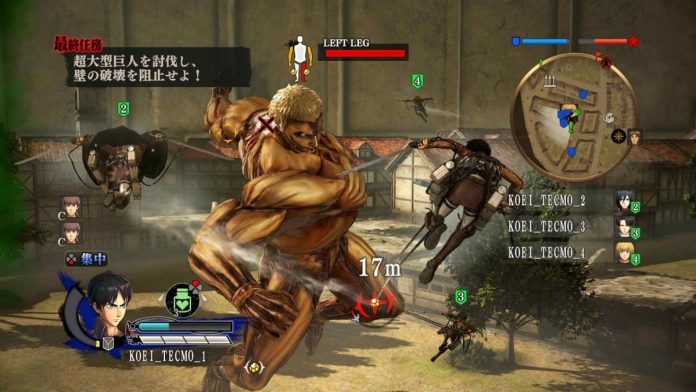 Koei Tecmo Games’s promised update that will introduce online multiplayer mode for their new game “Attack on Titan” has finally arrived, and the game publisher shared more details about the update. Aside from now being able to play a battle against powerful Titans with other players online, the update also brought various new features and in-game gameplay additions that are aimed to improve gameplay experience.

According to a report by 4Gamer.net, the new patch for “Attack on Titan,” aside from adding the online multiplayer game mode to it also added a number of new features and gameplay elements.

First off is the new game mode called the “Investigation Outside the Wall” mode. This is a free-roaming mode wherein players can team up with up to four others and do a cooperative online game to hunt and take down Titans along the way. To make use of this new mode, all players must be running the game from the same console.

Wanting to brag about the Titan kill? Players can now decorate special Titan models at the Camp of the game. Additionally, this models can be used to show off in the Online Camp, as a trophy showing that the player had already killed this many and level of Titans so far.

The update also increased the Soldier Proficiency cap. It also gave each of the 10 playable characters more identities in fighting as each of them was given one original skill that is totally their own. The cap for the Equipment Reinforcement was also given an increase.

Aside from the current “Easy” and “Normal” modes, the update added a new “Hard” level of gameplay. Players also now get more rewards in completing the tough quests in the “Shin Shingeki Mode.”

As for multiplayer gameplay, the update added information markers to the four characters that are travelling and fighting.

“Attack on Titan” is currently available in Japan for the PS4, PS3, and the PS Vita. It will have an English release sometime around this year.