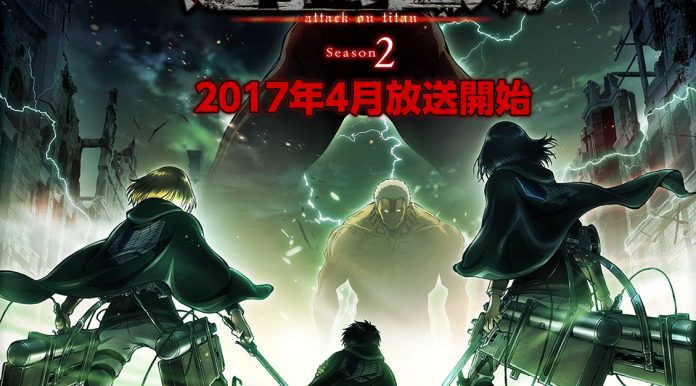 After two years since season 1 was concluded, the premiere date of “Attack on Titan” season 2 has been announced.

Earlier this month, Funimation confirmed that the second season of the anime series will premiere on April 1.

In December of last year, the fans of the anime series celebrated when the trailer for season 2 was released by the entertainment, anime, and foreign licensing company. However, there was no airdate announced at that time.

On the teaser trailer, a colossal army of humanoid giants was shown heading towards the human society. Apparently, there’s a rupture at Wall Rose, the second outermost wall which defends the citizens of the three districts Chlorba, Karanese, and Trost.

The anime’s heroes Eren, Mikasa and Armin are seen eliminating Titan after Titan in a mission to save every civilian inside the wall. It appears that the Survey Corps are being mobilized for another war against the flesh-devouring beasts.

Some say that in the upcoming season, Eren, together with his friends and elite human warriors, will embark on a journey outside the enormous palisade. However, their motive remains a mystery.

It’s speculated that Eren, a Titan shifter, has found a way to annihilate their enemies. Others believe that the humans have decided to co-exist with the Titans and that the journey outside the walls is to make peace with the giants.

One of the scenes in the trailer has showcased furious giant catapulting a horseman. Another smaller titan is seen digging through the bodies of other giants. According to some, avid fans of the manga can certainly recognize the average-sized beast.

Furthermore, there are reports saying that the upcoming installment will feature a rebellion that will take place in the human society within the walls.

However, nothing is set in stone regarding the storyline of the “Attack on Titan” season 2. Readers are advised to take these reports with a grain of salt.