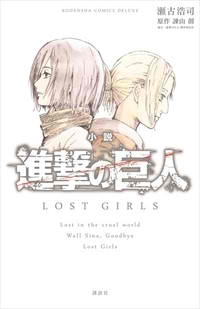 The light novel spinoff Attack on Titan: Lost Girls will get a manga series adaptation by Ry?suke Fuji.

The light novel aims to give fans a much deeper understanding of the characters Mikasa and Annie, revealing significant back stories for the two characters.

Attack on Titan creator Hajime Isayama had a hand written message on the paper wrapper of the novel during its original Japanese release: “Read this and you’ll understand well the primary reason behind Seko’s wonderful job on the Attack on Titan anime.”

“Regarding why I chose to write a story about Mikasa and Annie (the necessity of telling a story about these two reticent females),” Seko previously said. “There is clear reasoning behind it, but it’s much too long of a story to explain, so I’ll spare the detail. Fans’ interest (and hearts) have been captivated with Mikasa’s and Annie’s backstories, and, at the same time, perhaps I wanted on a deeper level to understand them through writing with my own hand the past that they may be carrying with them.”

US manga publisher Vertical also recently announced their acquisition of licensing rights for Attack on Titan: Lost Girls, along with three two other manga.

The Attack on Titan: Lost Girls manga will be published by Kodansha on August 9, and will have a full-color opening page.