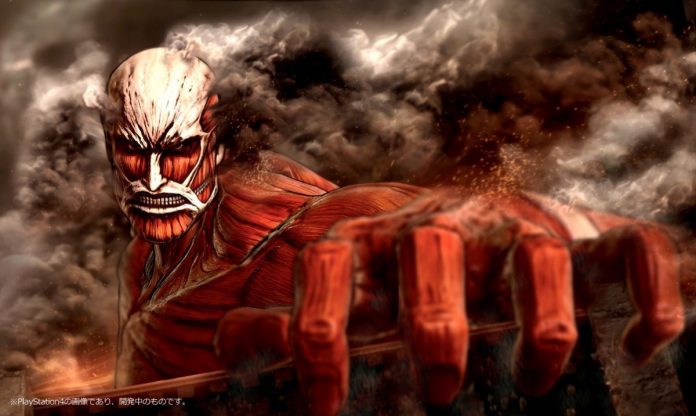 Fresh new details regarding the much anticipated “Attack on Titan” game have been revealed, as the game developer, Koei Tecmo Games, released a new set of screenshots, as well as details about the upcoming gameand a special edition game package upon release!

The developers released the new screenshots via Japanese site Game Jouhou, showing a ferocious Colossal Titan getting ready to tear down a Wall, and the chapter in Eren’s story which includes early days of his training in using the 3D Maneuver Gear to take down Titans.

The report also detailed about how the 3D Maneuver Gear will work out in the game. As much as players may want to lay waste with their new nifty Titan-killer device on their hands, it seems that the 3D Maneuver Gear will work just like how it will, should it become a real life thingthat is, it runs out of fuel and the blade edges of the swords will get dull the more it gets used.

The game will also be introducing new sets of weapons that are yet to make their debut in the anime series.

In addition to this, the Limited Edition “Treasure Pack” will be available once the game gets released. This special game package will of course include the main game, as well as exclusive bonus content including official game documents, the game’s official soundtrack, an iconic scarf towel inspired by the series, a set of two badges each for Eren, Mikasa, and Levi and DLC packs containing costumes. The “Treasure Pack” Limited Editon package will sell for a price of 12, 800 yen, or equivalent to at least $103.

The new teaser trailer for the upcoming “Attack on Titan” game shows more of the 3DMG. “Attack on Titan” will be released for the PS3, PS4, and the PS Vita before the year ends, exclusively for the Japanese market. A Western release will follow sometime in 2016.

Lenovo Phab Plus now available in Malaysia for RM 1,199; pre-order...