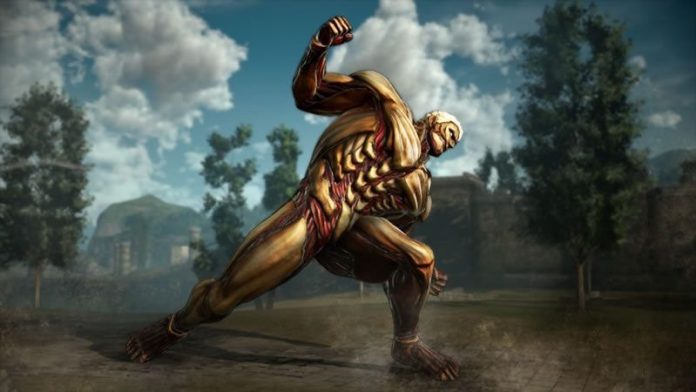 Koei Tecmo games recently released a new set of screenshots coming from their upcoming and much awaited game “Attack on Titan.” This time, the screenshots showcased the monstrous Armored Titan as well as the animalistic Beast Titan.

The new set of screenshots can be found on the game’s official website along with all other previously released promotional materials such as other images and teaser trailers. The Armored Titan was shown in action going on a rampage inside the Walled areas and fending off attack from soldiers in 3D Maneuver Gear. Since the game has quality 3D graphics, the details on the Armed Titan seemed to be very realistic.

Also, the huge and intimidating wild Beast Titan was featured in its own set of in-game screenshots. While looking to be a slow moving enemy, the Beast Titan can actually deliver powerful blows that can be extremely fatal even with a single hit only.

Previously, Koei Tecmo Games also released a series of tutorial videos that explained the basics of gameplay. The tutorial series was called “Teach Me, Captain Levi!” and it divided the gameplay system of the game into four different parts/steps.

The first step showed the Camp, where players rest, restock resources, and refuel their 3DMG. The second one showed the cut scene before the battle begins, which was in line with the flow of story of the first season of the “Shingeki no Kyojin” anime. The third one is the battle itself, which consisted of planning, targeting, and executing the attacks in the most precise timing as possible. The fourth and the last stage of gameplay process showed the cut scene following the battle, which was still in line with the original story. After that, the player returned to Camp and the process would repeat over and over.

“Attack on Titan” will release for the PS4, PS3 and the PS Vita in Japan on Feb. 8. It will have an English release sometime this year.