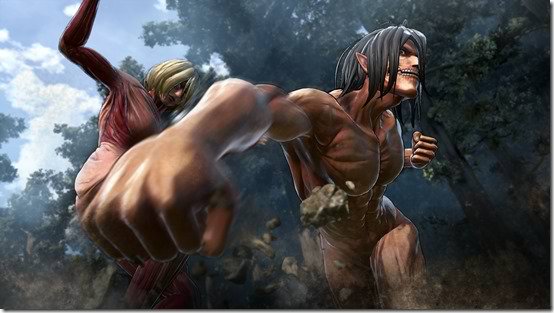 Game publisher Koei Tecmo Games recently released a trio of new gameplay footages from their upcoming and much awaited game for the PlayStation family of consoles, “Attack on Titan.”

Each video showcased a specific gameplay element. The first footage showed players the basic movements, commands, and actions that are performed in the game. The 3D Maneuver Gear is shown in action, as the main protagonist, Eren Yeager, swings around as he takes down a Titan. The targeting system is shown, which shows players the distance of the character from the Titan, so the player can deal the blow at exactly the right time.

The second footage, meanwhile, showed the game’s team up feature, wherein the player can team up with other players (possibly both player controlled and computer controlled) in taking down enemy Titans. Teaming up is shown to be handy especially when someone gets in a tight spot, or a horde of Titans are too hard for one person to take on.

The last gameplay footage featured the special gameplay skills of Captain Levi Ackerman. Just like in the anime and manga, Captain Levi is shown in the game as someone with exceptional speed, agility, and strength compared to other characters. Levi taking on a group of Titan all by himself complete with flashy skills and moves and showing his proficiency in using the 3DMG were also seen.

Based on the hit manga and anime series of the same title, “Attack on Titan” is set when humanity is threatened by the existence of monstrous beings called Titan. As a team of soldiers fight each and everyone of them, they unlock the deepest secrets of the origins of the Titans and what connects them to the humanity.