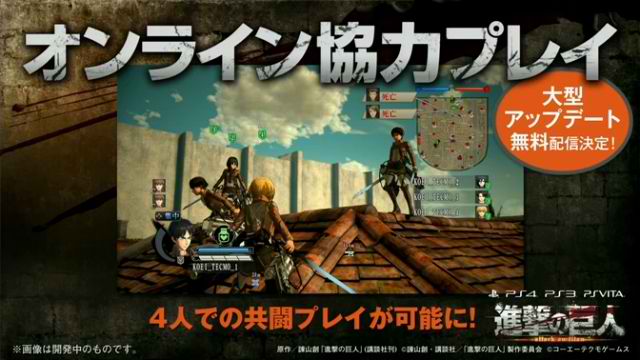 Almost a week before the game gets launched initially in Japan, Koei Tecmo Games announced a major free update coming in for their newest and upcoming JRPG game “Attack on Titan,” which will introduce an online multiplayer co-op mode for the game. The update will come in March and is set to add some new items to the game.

The upcoming major patch will also include more than 10 new items to the game, which includes Titan models that the player can decorate the surroundings of the camp area with.

Additonally, Koei Tecmo Games also revealed the complete line up of upcoming DLCs from February to March. All upcoming DCLs will come as paid additional contents, though it was not yet confirmed how much each DLC will cost.

For this month, Feb. 18the same day the game gets released in Japanwill be the release date for the “New Year” costumes and weapons. Feb. 25, meanwhile, will see “Festival” costumes, a new story mode episode “Wings Requirements” and two other additional episodes.