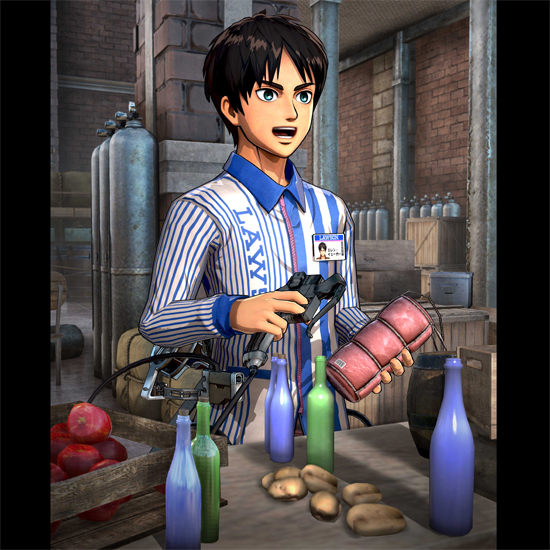 In a new gameplay video released by game publisher Koei Tecmo Games, two new special costumes were shown for the first time. First off is the Lawson employee costume for main character Eren Yeager. The Lawson costume reimagines the character as an employee in the convenience store chain. However, he won’t just be tending to customers’ purchases, as Eren would still spring into action killing off Titans along the way while wearing the uniform as his costume. The Eren Yeager Lawson employee costume will be given out to players as a free DLC when purchasing the game on Loppi HMV.

Aside from the special DLC costume, the “Attack on Titan: Treasure Box Edition” will include the full game upon its release, the “Official Scouting Report” art book, a copy of the game’s official soundtrack, a muffler towel, and a set of six tin badges with two designs each for Eren, Mikasa, and Levi.

“Attack on Titan” will be released on Feb. 18 in Japan for the PS4, PS3, and the PS Vita handheld. It will have an English release sometime around this year.