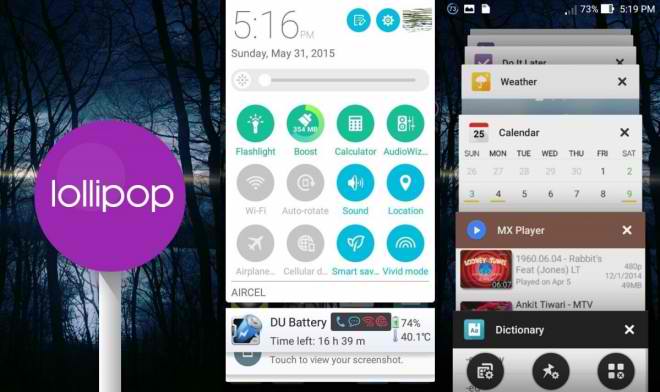 The Android OS scene is moving very fast. With the latest Android M (confectionary branding may come soon enough) coming to users late this year, phone manufactures have been doing their best to roll out updates to Android Lollipop to most, if not all, of their capable smartphone models. Just recently, Asus users had something to be happy about as they will finally have the Android Lollipop botting up their devices.

According to a report by GSMArena, Asus Zenfone series of smartphones will be receiving their Android Lollipop v5.0 upgrade via over-the-air (OTA) update or via direct download form Asus’ website. Zenfone 5 units with model numbers A500KL, A500CG, and A501CG will be receiving the update. Zenfone 4 A400CG will be getting it too, as well as Zenfone 6 A600CG and A601CG models. OTA updates are now available for all of the said models, except for the Zenfone 6 models. However, direct download (from the following sources: source 1 source 2 source 3) are available for all models. Instructions and flashing tips are also found on the download site.

According to International Business Times, some changes the Lollipop upgrade will bring to the Zenfone models include a new set of widgets. There is the new Battery widget, PhotoFrame, Movie Studio, Magic Smoke Wallpapers, SuperNote, etc; a change in the layout of the Quick Settings/Recent Apps; Dialer/Contacts tabs now reduced to three from five; also fixed the bug where users lose some files when changing the name of a folder in File Manager; and added new systems apps like KKBOX, Dr. Eye, Zinio, PubuBookBuffet, eReadingNow, and ASUS Game Center (all said apps available only for Taiwan users).

The software update also brings in all the core features of the Android Lollipop v.5.0, along with ASUS’ very own ZenUI running on top of the Android OS.

LG Class news: Class may come to the US market via...